OsteoMenagerie 6: Tips for Siding the Calcaneus

The calcaneus, often colloquially referred to as the ‘heel bone’, is the largest tarsal in the human foot. It preserves relatively well archaeologically speaking, appearing both in individual cemetery burials and in commingled graves. The photo below is of a specimen from Predmostí, a Gravettian site in the Czech Republic dated to 24-27,000 BP! 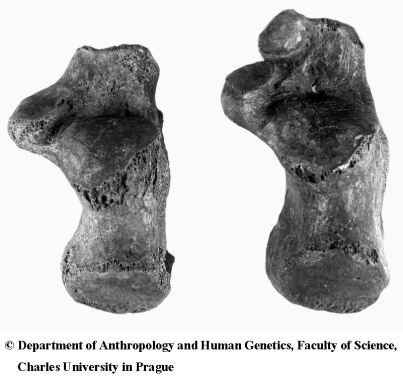 In my experience, preservation of the calcaneus tends to be poorest posteriorly, in the region of the calcaneal tuberosity, whose rugose and irregular surface conceals a fairly broad expanse of fragile cancellous bone that is often subject to taphonomic damage. In contrast, the anterior portion of the bone, particularly the anterior, middle and posterior articular facets for the talus, is often relatively well preserved. However, the underlying form and structure of the posterior half of the calcaneus can be preserved even when the compact surface bone has degraded. Accordingly, it’s important to be able to side the calcaneus based on both (i) its overall shape and (ii) partially preserved portions of the articular facets for the talus. Once I’ve realized I’m dealing with a calcaneus, I start by orienting the bone is relative to my own feet, with the massive calcaneal tuberosity situated posteriorly and the characteristically smooth articular facets for the talus positioned anteriorly and medially when seen in superior view. However, if you’re having trouble with orientation while starting to learn your way around the oft-tricky tarsals, I’ve got a few shortcuts…

1. Siding the calcaneus based on its overall shape: If the overall calcaneal form is relatively well-preserved, but the articular facets themselves have degraded or have been caked with intractable sediment, the easiest way to side the bone is, somewhat counter-intuitively, to flip it over. Lay the bone on a table in front of you so that the rugose inferior surface of the bone is facing up, the more regularly oval shape of the bone’s posterior portion stretches toward you and the branching irregular ‘arms’ of the sustentaculum tali and trochlear process stretch away from you. The sustentacular sulcus for the flexor hallucis longus tendon should be facing up (see White & Folkens HBM p.294 for a refresher if you need a good photo of this feature). When the bone is oriented in this position, it will form the shape of a lower-case “r” when the bone is from the right. 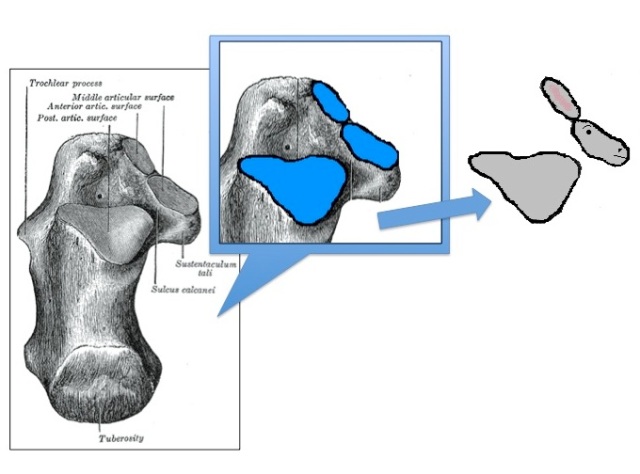 This trick works relatively well even if the specimen isn’t a beautiful anatomy illustration like the calcaneus shown above. I tried using it on a photo of one of my archaeological specimens, and it still worked – despite slight variations in the size and form of the articular facets, most of the time you will be able to make out the shape of the donkey. 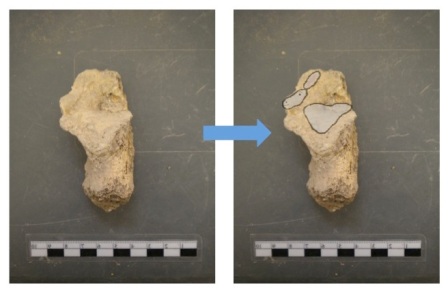 Right calcaneus, superior view (This is actually a left calcaneus with the image flipped horizontally, but I wanted to give you a little variety. Say no to side bias!)

3. Test your knowledge: If you have an upcoming tarsal quiz, test your newfound knowledge of calcaneal siding by correctly identifying the following in the photo below: 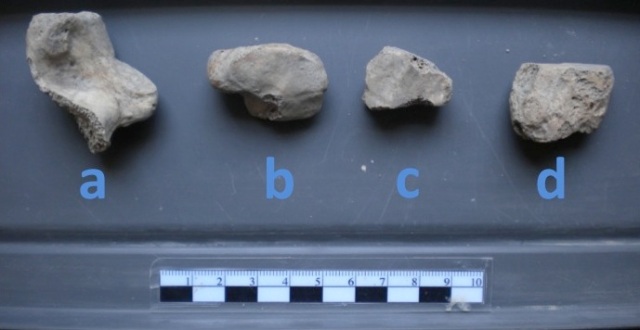 (ii) the anatomical region (anterior, posterior, medial, lateral, etc) that the calcaneal fragment is from;

(iii) the side the calcaneus is from.

IMAGE CREDITS: The superior and inferior views of the Predmostí calcanei are taken from here & here, respectively.  The original labelled illustration of the calcaneus was found here. The lower-case letter r was found here. All photos with photo scales (of the calcaneus and tarsals) were  taken at the Museo de Jaén in Summer 2013.

This entry was posted in Foot, Osteology, OsteoMenagerie, Siding Tricks, Tarsals, Test Your Skills and tagged calcaneus, siding the calcaneus. Bookmark the permalink.

5 Responses to OsteoMenagerie 6: Tips for Siding the Calcaneus