Merely a cuneiformality: Identifying and siding the cuneiforms 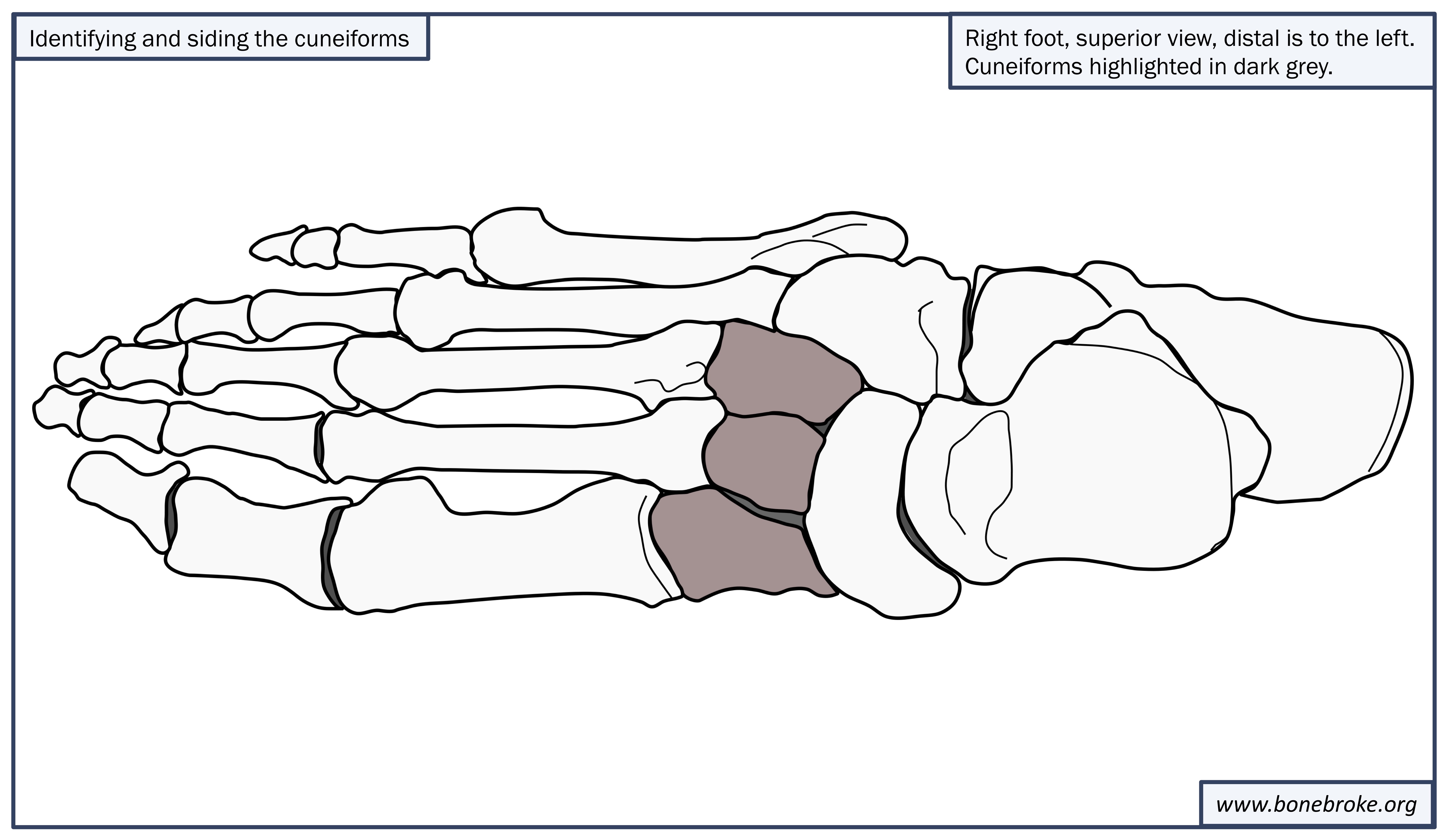 While working at a late Neolithic mortuary site in Portugal, my friend Anna and I would frequently joke that we were excavating the ‘burial of the feet’, because it seemed like every day on site we chanced upon a new navicular. The site wasn’t actually an ossurary where elements were deliberately sorted spatially – in contrast, our joking and obsessive attention to tarsals were likely  brought about by too many days excavating under the intense Iberian sun. Or, it may have had something to do with the traditional Iberian cuisine we’d eat for lunch.  For some reason, the Portuguese are huge fans of rice and cod, particularly when it is 40˚C. Ah, the gentle warmth of an Iberian summer. But I digress. Foot bones do have a tendency to preserve particularly well in the archaeological record, and it is important to be able to identify and side them, especially if you’re dealing with commingled remains.  After spending a lot of time blankly staring at various tarsals,  in lab settings, in settings where the bones are covered in dirt, or in settings where I am covered in dirt, I think I’ve finally come up with some reliable tricks.

To start off with, there are three cuneiforms, all of which articulate proximally with the navicular and distally with the metatarsals. The lateral cuneiform also articulates laterally with the cuboid. I’ll address them one by one.

I. The Medial Cuneiform:

Identification: Unsurprisingly, the medial cuneiform is the most medial of the three tarsals – as per usual, anatomists for the win when it comes to terminological creativity. It is also the largest of the three bones, and exhibits a relatively gentle curvature. The most convex point of its arc is medial. 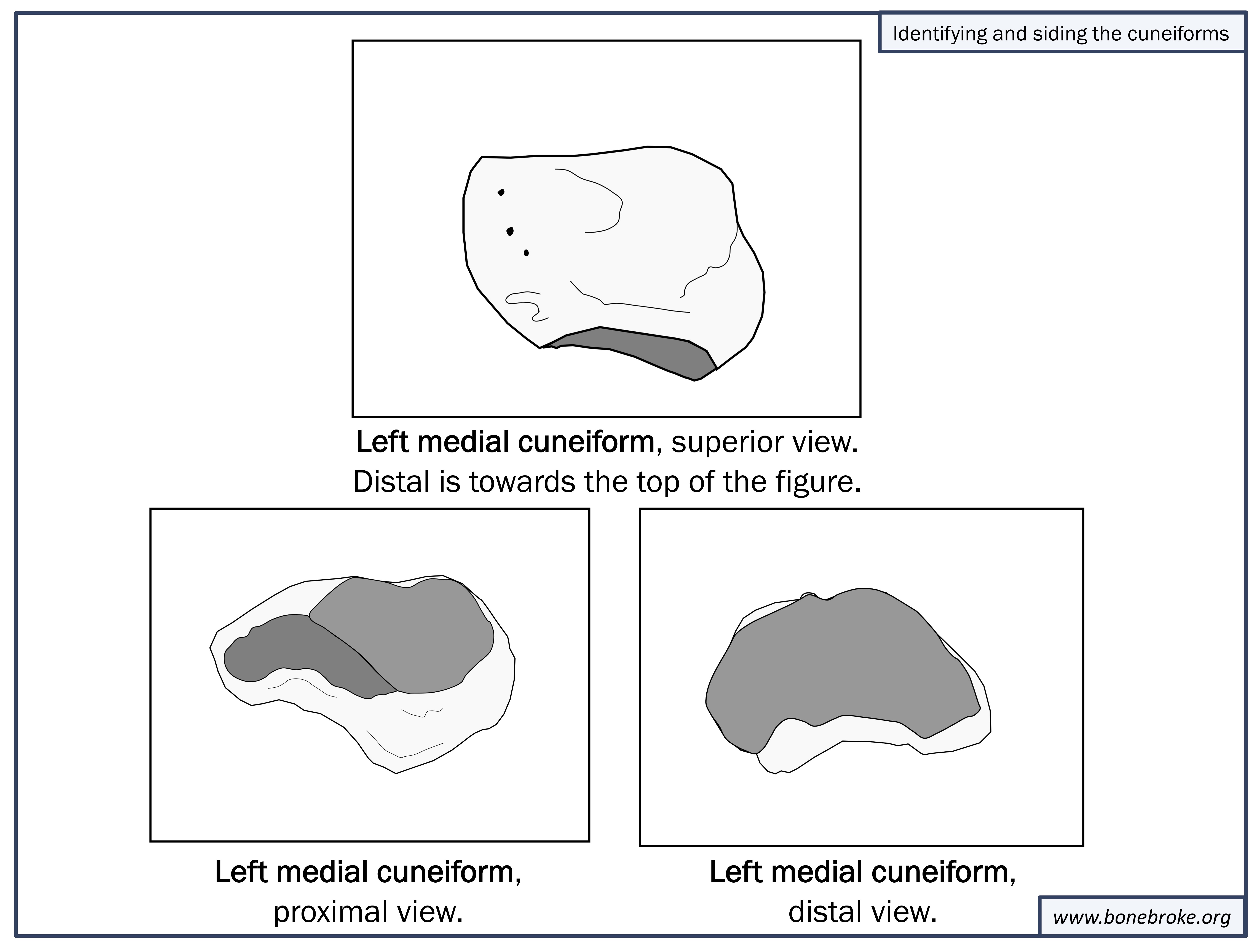 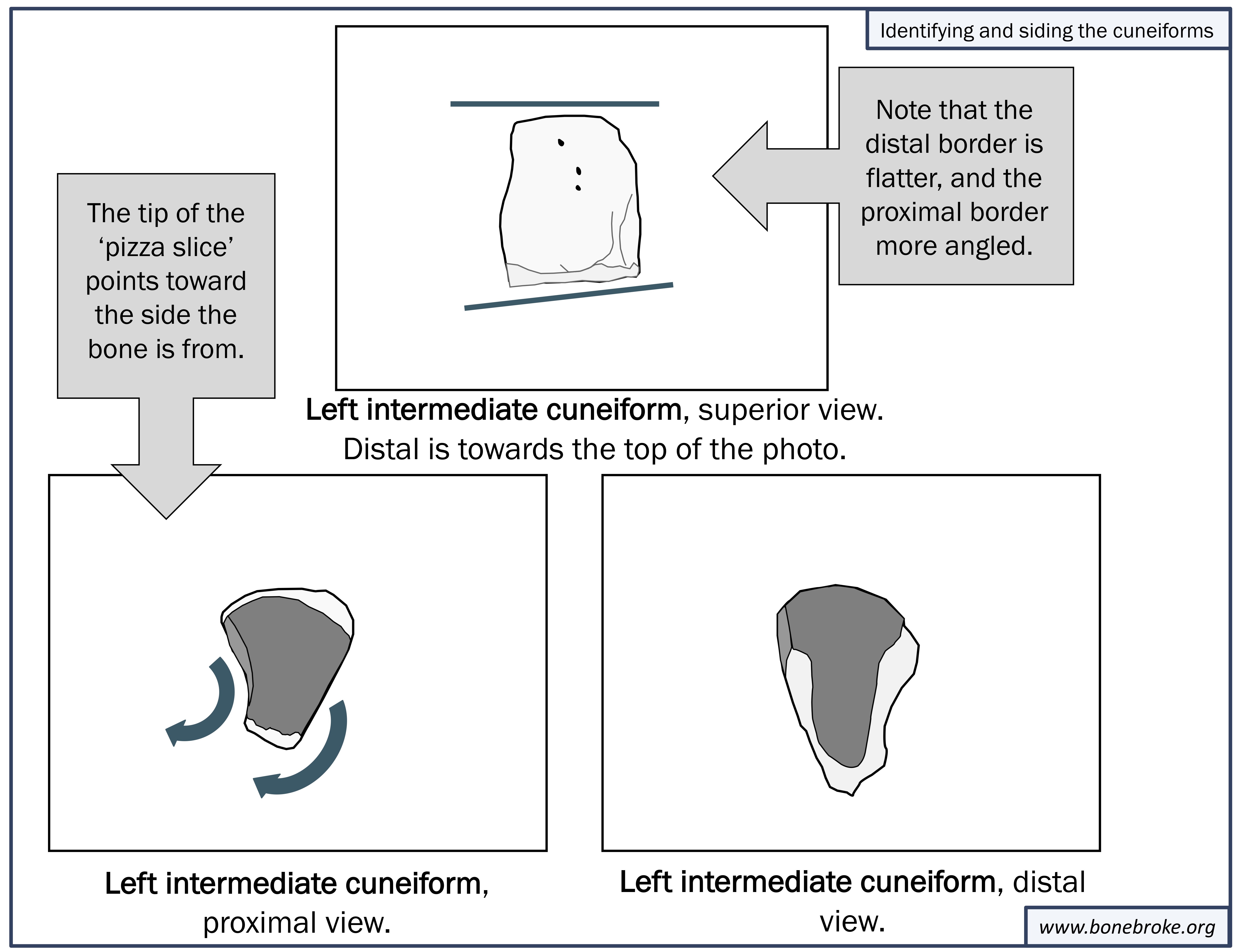 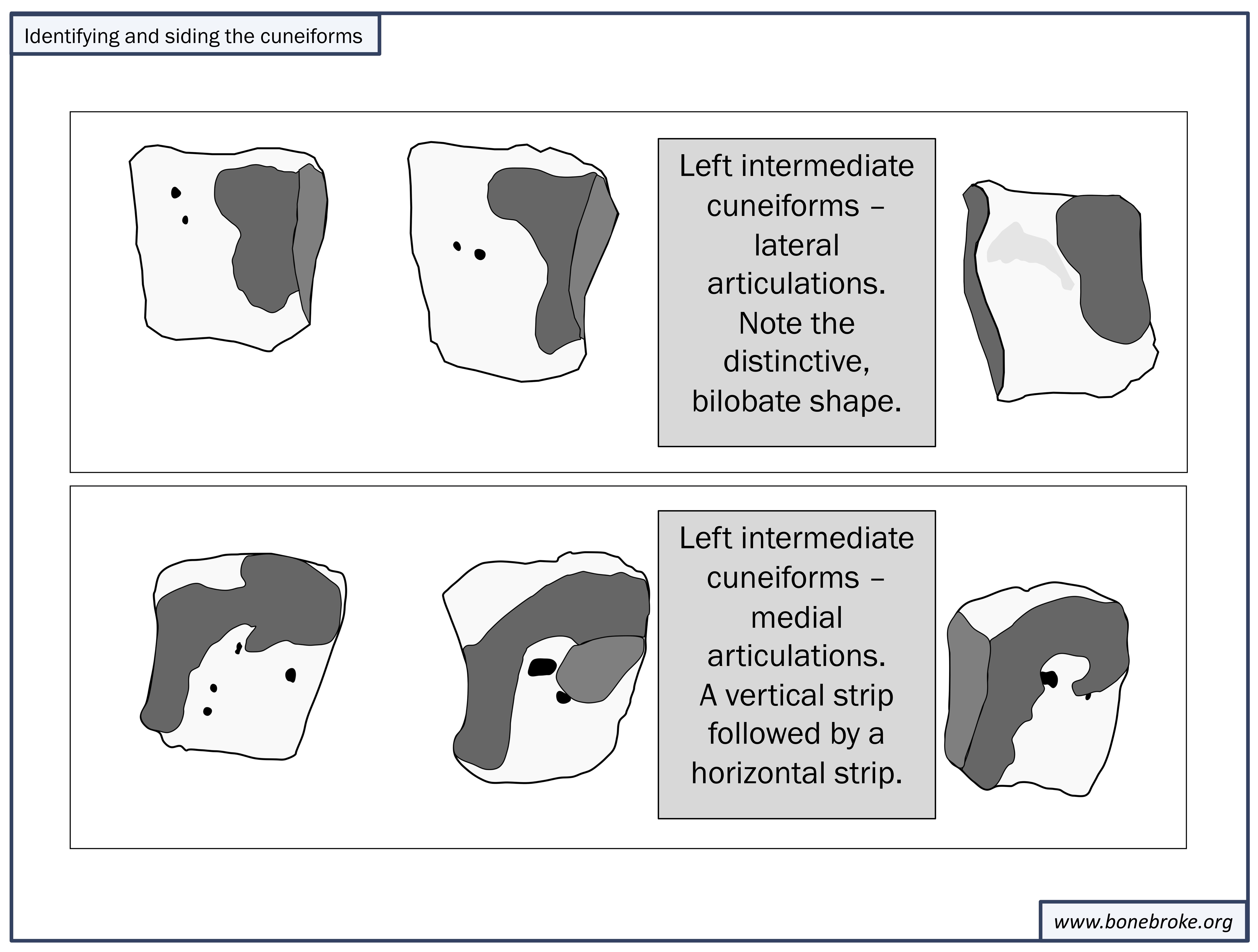 Identification: In superior view, the lateral cuneiform has the most rectangular outline, and it is intermediate in size between the first two cuneiforms. Of the three tarsals it has the most irregular shape. Overall it is triangular in form, but it is a much less delineated triangle than the intermediate cuneiform. If you place it on a table so that the inferior end is pointing up, it looks rather like a melting Hershey’s kiss. 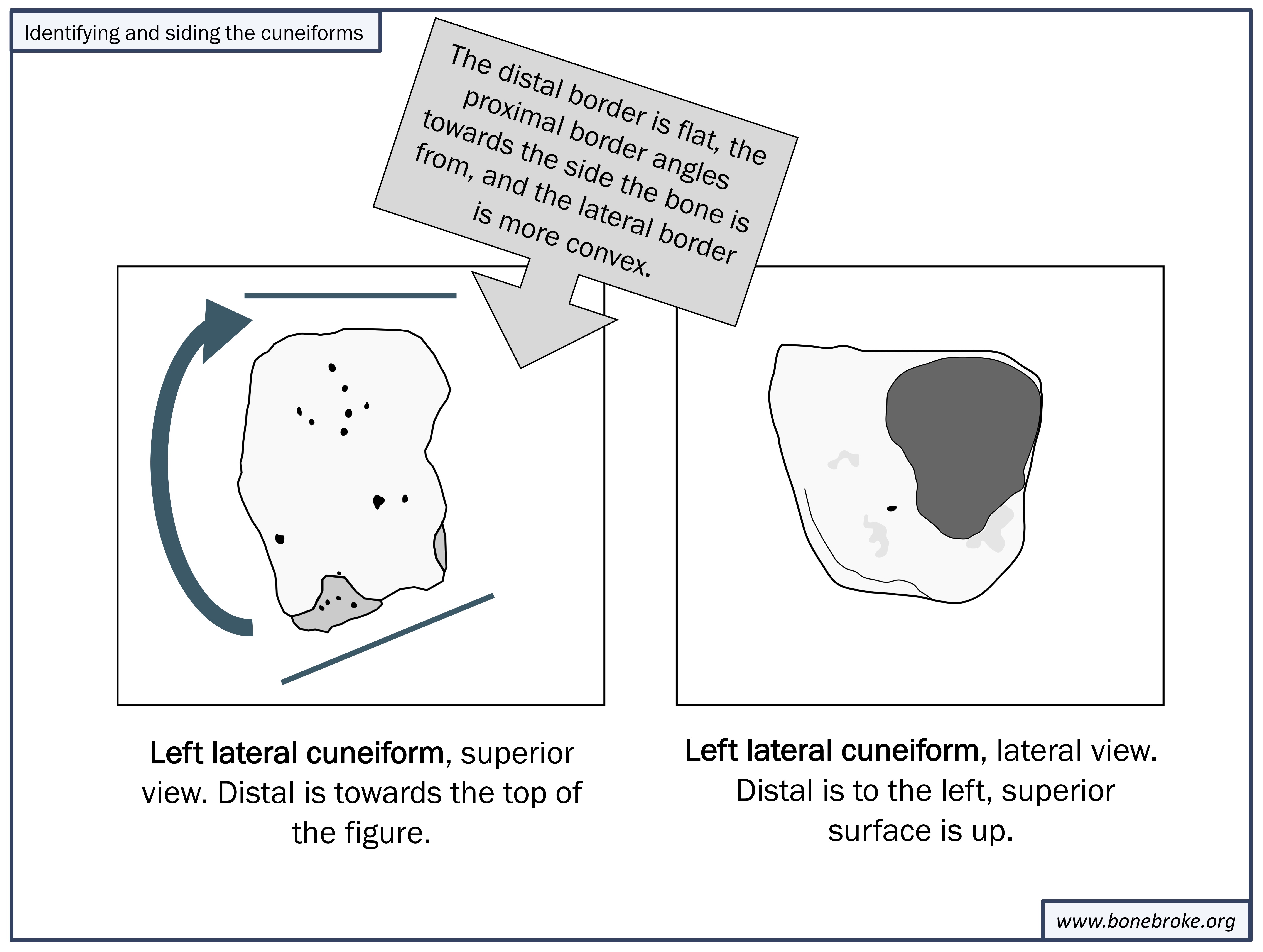 Siding: One of the easiest ways to side the lateral cuneiform is to use its superior surface. Orient the bone so that the superior surface is up. Place the distal, flat edge of the ‘rectangle’ flat against your index finger. The opposite proximal edge will angle laterally and towards the side the bone is from. In superior view, the outline will often appear more concave medially and more convex laterally, as if it were hugging the intermediate cuneiform. Finally, the most helpful articular facet for siding is the lateral articular facet for the cuboid, which occurs as a well delineated round shape on the upper half of the lateral side of the bone.

And there you have it. Everything you always wanted to know about the cuneiforms but were afraid to ask. Happy Thorsday, everybody.

Looking for more information on the tarsals? These Bones of Mine provides a solid overview post of the entire foot here.

Image credits: All bones are traced from photographs which were taken using the teaching collections housed in the osteology/paleoanthropology lab at the University of Michigan. The first image is traced from an image available at thinglink.com.

This entry was posted in Foot, Osteology, Tarsals and tagged siding tricks, Tarsals. Bookmark the permalink.

7 Responses to Merely a cuneiformality: Identifying and siding the cuneiforms