In July I had all four of my wisdom teeth removed, which I bore with about as much stoicism as could be expected:

After the first terrible week of scrambled eggs, applesauce, and facial bruising, I regained some of my customary optimism when I realized that I had two new upper third molars to use for comparative specimens. The lower third molars sadly did not survive the process of extraction, as they had to be quartered before being removed from my mouth.

When I examined my upper molars more closely, I noticed something quite curious. Nothing appeared out of the ordinary when viewing the teeth from an occlusal and mesial perspective (though I found the lack of crown symmetry intriguing): 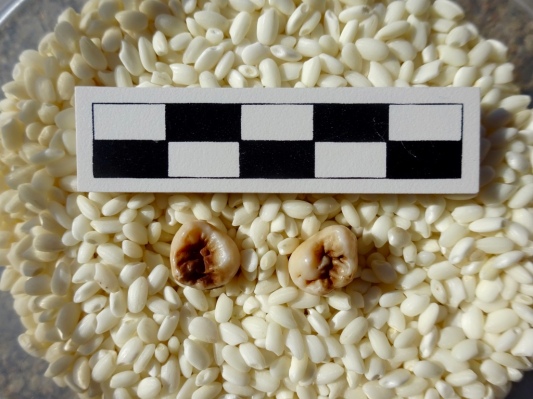 However, when I examined the teeth in distal view, it was evident that there was something distinct about the right upper molar – a dark raised line was clearly visible on the tooth crown. 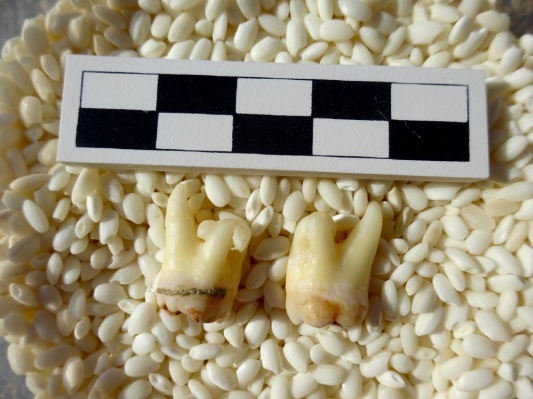 As soon as I saw that band I grew quite excited. This discovery was in equal parts gross and compelling. That dark strip is calculus, or hardened dental plaque, which I’ve seen in many of the prehistoric individuals I have analyzed bioarchaeologically. In one fell swoop I had both justified the removal of my upper molars (as obviously, I could not properly brush them), and connected my own dental experiences to those of the ancient people I study. Neat!

Calculus is a frequently employed marker of dental health in the skeletal record.  Ortner (2003) identifies it as a common precursor to periodontal disease, writing that ” bacterial plaque…consists of a sticky coating including protein, foor particles [sic], and living and dead microorganisms. When plaque mineralizes, it becomes calculus and in this form can be found on archaeological skeletal specimens as relatively hard concretions on the tooth surface”(593). In their volume on the archaeology of disease, Roberts and Manchester (2005) note that dental plaque “consists of micro-organisms which accumulate in the mouth, embedded in a matrix partly composed by the organisms themselves, and partly derived from proteins in the saliva,”(71) and describe how such plaque “can become mineralized into dental calculus where crystallites of mineral are deposited in the plaque”(72). Brothwell (1972) simply describes dental calculus, or “tartar” as “a concretion which forms on the teeth, usually at the margin of the gums. It consists mainly of a calcium deposit which, although fairly soft, nevertheless tends to persist on the teeth of earlier man”(155). In his glossary, White (2005:420) also uses the term tartar, which I have not heard used in bioarchaeological contexts before – I think it may be more common in dentistry.

Bioarchaeologists score calculus by visually assessing the amount of hardened plaque present on the tooth. In my experience, most scoring systems go something like this:

In reality, Brothwell’s (1972) scheme categorizes calculus as either “slight,” “medium,” or “considerable,” while Buikstra and Ubelaker (1994) use a variation that sorts the degrees of calculus into “small amount (1),” “moderate amount (2),” or “considerable amount (3).”

The etiology of calculus has been related to a number of different immunological causes, including “diet…systemic disorders, water fluoride content, improper tooth cleaning, type of food preparation, nutrition, and stress”(Arensburg 1996:140). Whatever the cause of calculus, archaeologists and bioarchaeologists have recently begun to use it in a series of groundbreaking new studies that explore what exactly  ancient people were eating.The most well-known instance of such research is found in Henry et al. (2010). Their paper throws a wrench in the works of those who claim that the “paleodiet” actually dates to the Paleolithic, as their study demonstrates that Neanderthals in Iraq and Belgium were eating grass seed starches like, and some of these grains showed signs of cooking. Hardy et al. (2016) have also recently demonstrated that Early Paleolithic hominins who lived in Israel 200,000 to 420,000 years ago were also eating starches, as well as seeds and nuts (see this post for a concise summary if you can’t access the article). Finally, Christina Warinner and her colleagues are conducting fascinating work on the origins of milk consumption and dairying in the Bronze Age (Warinner et al. 2014) using, you guessed it: dental calculus.

All told, calculus presents a disgusting and insightful window into what people in the past were eating. It also occurs frequently in prehistoric samples, which is why it was so exciting for me to see it on one of my own teeth. Even toothbrushes and trips to the dentist could not prevent me from accumulating plaque in a spot that was tricky to clean, which underscores why it was so common in past populations with poor dental hygiene. I won’t be sending my own molar off for analysis, however – no one else needs to know how much of my diet consists of Cheez-Its and Poptarts.

Henry, A. G., A.S. Brooks, and D.R. Piperno (2010). Microfossils in calculus demonstrate consumption of plants and cooked foods in Neanderthal diets (Shanidar III, Iraq; Spy I and II, Belgium) Proceedings of the National Academy of Sciences, 108 (2), 486-491