The Bear Paw Saga: Volume I

My friend Alice’s parents live in a beautiful but isolated house in the middle of the western North Carolina hills. Their dogs, Ruby and Tucker, are free roaming, and often drag home portions of animal carcasses that they encounter during their sylvan wanderings. 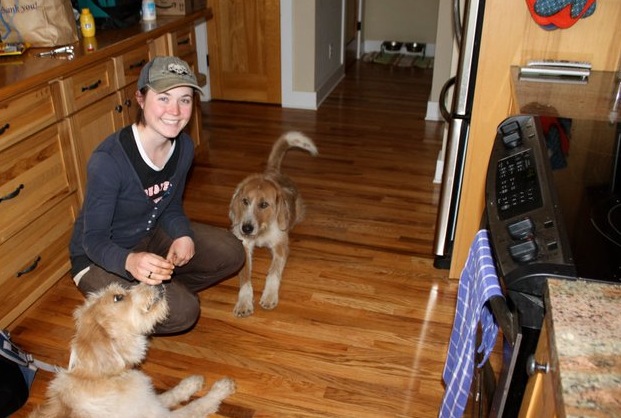 My favorite story that Alice tells about her courtship with her husband details the first time she brought him home to meet her parents. Late one evening, after a day of travel, they began the long drive up the steep, densely forested hill that leads to her family’s place. As they wound up the gravel path, the car headlights lit upon strings of articulated vertebrae, festooning the trees that lined the drive like macabre Christmas ornaments. The sight was not one guaranteed to instill confidence in a visiting suitor, and Alice worried that her parents had made a less than perfect, potentially homicidal, first impression. However, rather than attempting to scare off her beau, her father had merely been trying to prevent the dogs from dragging the deer spines back into the house, and so had thrown them up into the local foliage. This gives you some sense of the havoc these domesticates wreak on a daily basis.

As you can clearly see, I was not at all excited about the prospect of obtaining a bear foot. Particularly not one that was this enormous:

And while I am perpetually enamored of comparative faunal specimens, I was particularly interested in procuring a bear paw because of their striking resemblance to human appendages. When I attended the NMHM forensic anthropology course a few years back, the instructors stressed that most forensic anthropologists are likely to come across at least one case of a bear paw mistaken for a human hand during their careers. Accordingly, ursine specimens were high on my faunal wish-list. 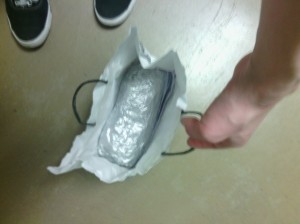 Alice put the paw in a ziploc bag, wrapped it in tin foil, and froze it. Two months later she drove the paw back up to Ann Arbor, where it moved into my freezer for a time. It remained happily ensconced in my apartment until I realized that I needed to do something with it before I left the country for eight months – while my roommate is exceedingly tolerant, I really didn’t want to have to explain to the subletters that the item in the freezer was “not a burrito” and “please, for the love of God, don’t open it”.

While I was initially planning on bringing the paw to the dermestids at my museum, two days before I was due to leave I found out that I couldn’t use the beatles because the remains were unprovenienced . This led to a momentary lapse in confidence – where on earth was I going to store a decaying bear paw for eight months? I had thawed it out over the weekend in anticipation of removing the fur for the dermestids, and it was already beginning to smell slightly rank. For some reason, problems of this nature always seem to plague my life.

Stages of bear paw dissection. Looks like a human foot in Figure 3, doesn’t it!?

Thanks to the kindness of faculty, all systems were go for bear paw burial.

Fortunately, after pondering my predicament for several minutes I remembered that I am friends with lots of archaeologists, and all archaeologists are CRAZY. Someone had to be willing to help me out. One emeritus professor, who works just down the hall from my lab, is famous for telling numerous stories about burying full bison skeletons in his yard. Compared to a whole adult bison, a bear paw seemed like a relatively small favor to ask. And, indeed, it was.

Just as I’d never dissected a bear paw, I’ve never buried a specimen in order to skeletonize it. After having an in-depth discussion with my faculty benefactor about best practices for burying faunal specimens, I decided to wrap the paw in chicken wire, so as to not lose any of the smaller tarsals or phalanges, while deterring any particularly intrepid animal scavengers. Initially I planned to staple the chicken wire shut, but what would up working best was simply folding the ends over into a sort of metal envelope, as you can see on the right.

Then, all that was left to do was to use the hard-won skills I have garnered from nearly a decade of archaeological training – in other words, dig a hole to put it in. 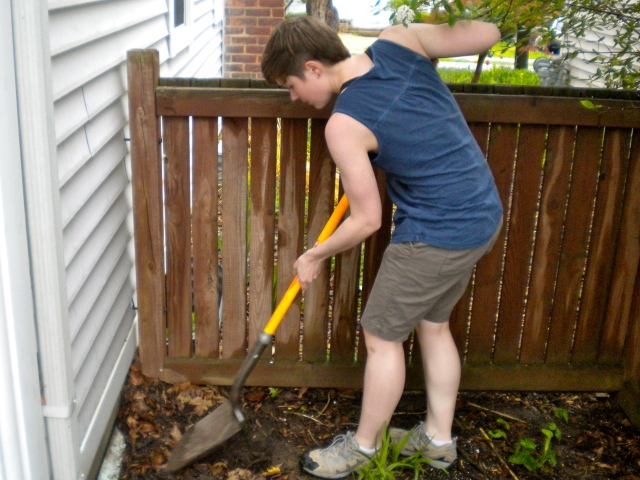 So, while I am abroad finishing my dissertation data collection, the bear paw is safely planted in Michigan soil. Stay tuned next spring for the rest of the adventure, starting with what transpires when I unearth it…. 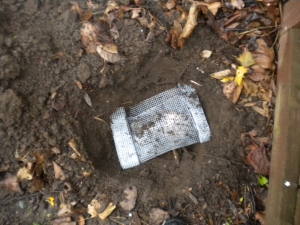 Image Credits: The first three photos were taken by Alice Wright. All other images my own.

2 Responses to The Bear Paw Saga: Volume I