Pop Culture Osteology: Once Upon a Time

Last night was Friday, so being the diligent graduate student that I am, I spent all evening organizing my spreadsheets, editing a chapter that is soon due and working on conference abstracts. Oh wait, no, no I didn’t, I spent it eating cookies and watching trashy American TV. I was immersed in an episode of ABC’s Once Upon a Time, a show noteworthy for its gritty depiction of life in small-town Maine, linear plot, and subtle script (sample dialogue: “I’m a dwarf, Nova. I belong in the mines. You belong with the other fairies, and that’s never going to change”).

However, mid-way through an episode, I was forced to hit pause. Prince Charming (Yes, I know) and Lancelot (Yup, that Lancelot) were journeying to Lake Nostos, a body of water that had formerly been home to a deadly siren, to try and find a cure for a wound inflicted upon Charming’s mother, who was being tended to by Snow White (See what I mean about linear plots?). Charming had slain the seductive siren in a previous battle, and so they arrived at the lake shore to find it empty and barren, drained of all water and hence of all magical healing properties. Charming blames himself, chalking the newfound aridity up to the death of the succubus. However, while traversing the lake bed they come across a skeleton that likely belonged to the siren (as is implied by the crystal crown that Charming hoists off of the remains), and I realized why this woman had had it out for all visitors in the past.

Wouldn’t YOU be a little tetchy if you had three fibulae? 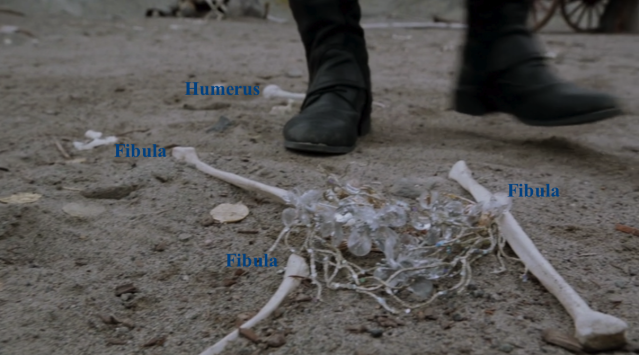 I have helpfully labelled the elements present in this poor woman’s skeleton here. In addition to the two ribs visible in the first photo, her postcranial remains appear to consist solely of a humerus and three fibulae. While the lowest long bone visible at first seems like it could be the distal half of a radius, you can tell it’s a fibula in the photo below based on the extremely long and narrow shaft that demonstrates the characteristic torquing angularity of this particular leg bone.

No wonder Charming looks so confused.

Image Credits: Once header photo was taken from Comic Con Geek, here. All other images are screenshots that are the property of ABC,etc, etc.

This entry was posted in Osteology, Pop Osteology and tagged Once Upon a Time, osteology, TV shows. Bookmark the permalink.

7 Responses to Pop Culture Osteology: Once Upon a Time