Pop Culture Osteology: Once Upon a Time #2

Why am I so focused on this show, you ask? I have approximately 1,675 reasons to need a turn-off-my brain fantasy outlet, all of them loose human teeth. With a month and a half remaining in my final season of dissertation data collection, I’m rapidly becoming an automaton who is only capable of dry-screening bags of dirt and human bone, entering teeth, and eating sandwiches. Watching Once reminds me that there are other things in life besides osteological to-do lists, and gives my beleaguered brain cells an hour a day to recuperate by languishing in a warm cocoon of televised intrigue.

I must say, however, that this past week the show has not done a very good job keeping my mind off of bones.

TO WIT: Here we are in Season 2, Episode 6, where the rakishly handsome Hook and dauntless Ms. Swan are invading a giant’s castle in order to steal a magic compass that will allow them to journey to small-town Maine, an apparently irresistible destination for all fairy tale characters. Emma and Hook decide that their best shot at disarming the giant is to lull him into a deep, unnatural slumber. However, in order to dose him with a magic sleeping potion, they must first attract his attention. Hook, being your typical high-T costly-signaller, decides to alert him to their presence by banging on a a nearby drum. Logically, he grabs the nearest large object at hand to use as a mallet and races to the drum. 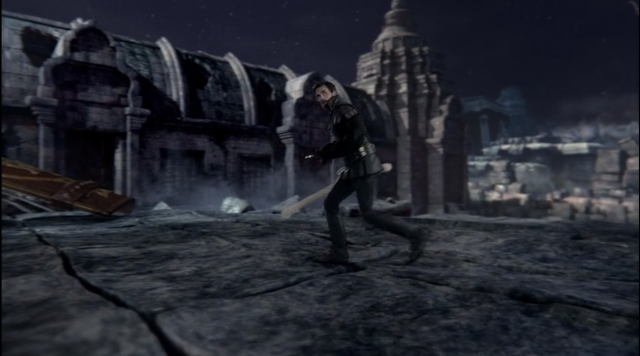 But wait, you ask, what is that he is carrying? Some kind of bone? Clearly it’s too big to be human. Ostensibly it could belong to a giant, since all of the giants at the castle except for the antagonist were slaughtered in a recent war with the humans. Let’s take a closer look, shall we? 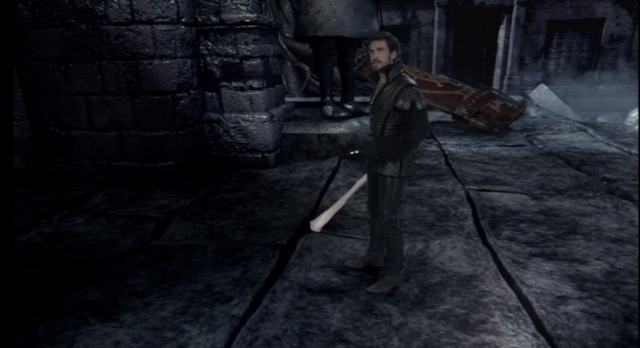 Hmmm…definitely not a bone belonging to anything anthropoid. It’s too long and narrow, and exhibits such attenuated proximal and distal ends. It seems oddly familiar, however.

Perhaps because it is a BIRD ULNA. 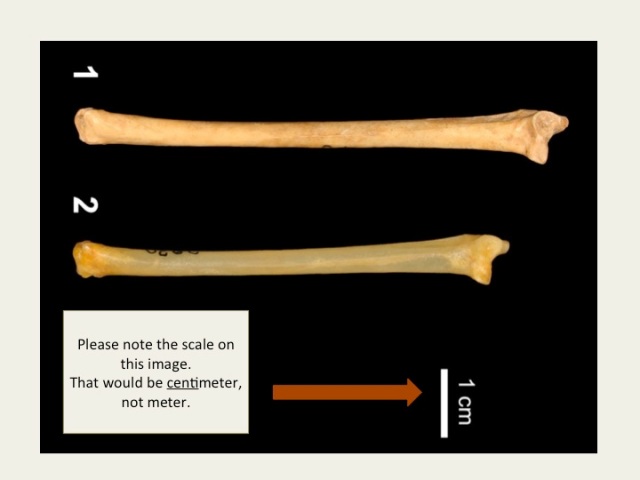 This bone bears a striking resemblance to what Hook is using to drum up some interest from the giant. In fact, it’s basically identical once you remove the pesky issue of scale. 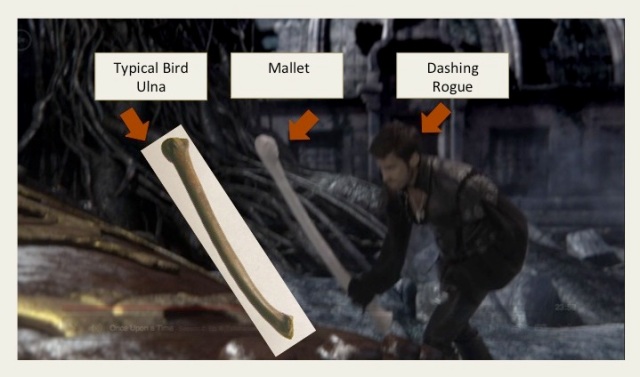 Here, you can even see how similar the end of the mallet is to a typical distal bird ulna: 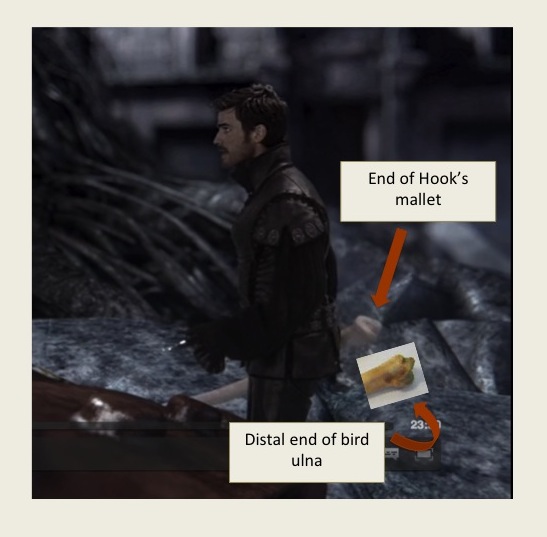 Now, if we conservatively estimate that this ulna is about half Hook’s height (actor Colin O’Donoghue is 1.80 meters tall, according to the ever-omniscient Google), that would be in the range of .9 meters, or 900mm long. For comparison, the ulnar length of the wandering albatross, a creature with the largest recorded wingspan of any bird, is around 400mm. When investigating a fossil albatross in 2007, Dyke and his colleagues collected a sample of ulnar lengths for Diomedea exulans, the aforementioned Yao Ming of the bird world. I used their data on the relationship between ulnar length and total wing length to calculate the equation for that line, as follows (note that the axis does not start at 0-0):

If that equation is used with an ulnar length of 900mm, it predicts a bird with a wing length of 1657mm. To give you an idea of that scale, here’s how that wing would compare to our formerly impressive wandering albatross sample:

Now, the average wing length for their sample is around .980 meters, and the Once ulna beats that out by a factor of 1.6. Wikipedia (with citations) lists the average wingspan of the wandering albatross as 3 meters. If we multiply that by our factor of 1.6, this suggests that the ulna Hook is being so cavalier with belongs to a bird with a wingspan in the neighborhood of 4.8 meters, or 15.7 feet. For an idea of how this scales relative to your average human, see the blue representative of the Quetzalcoatlus sp. in the figure below.

That means there is some sort of bird that is as large as a pterosaur making its home in the vicinity of  the giant’s castle. My question is simple: WHY AREN’T HOOK AND EMMA MORE CONCERNED ABOUT THIS? They spend their entire episode swanning around trying to capture the attention of a clearly distracted giant when all evidence suggests that there are BIRDS THE SIZE OF PTEROSAURS in their immediate environment.

Once, you are so full of mysteries. And that’s not the only curious osteological plot point from that particular episode…Tune in for another Once-inspired instalment of Pop Culture Osteology – “Jack’s Curious Case of Osteoarthritis” – next week.

This entry was posted in Fauna, Osteology, Pop Osteology and tagged albatross, birds, Bones, Once, Once Upon a Time, osteology, pterosaurs, TV, zooarchaeology. Bookmark the permalink.

7 Responses to Pop Culture Osteology: Once Upon a Time #2