I’m currently living in a part of the world where the sun rises at 9:00 am, and sets at 5:00 pm. Given that I’m at approximately 51˚N, this is not cause for apocalyptic alarm but instead reflects the brevity of winter days at high latitudes. I’ve only ever been this far north in undergrad, when I spent a month in northern Finland for a fieldschool run by McGill archaeology.  We were only two degrees below the Arctic Circle, but I loved it…because we visited Oulu in the early summer. I fondly recall the novelty of strolling through wooded campus paths at 10 o’clock at night, with dusk just beginning to descend as the last rays of light struck the abundant birch leaves in a final blaze of glory. Winter, unfortunately, represents the opposite side of that coin in the far north:

Instead of eternal sunshine, five o’clock now heralds the daily descent into stygian blackness. While the novelty of feeling like I’ve been posted to a polar research station has yet to wear off (though this feeling also provokes occasional subconscious tremors of concern, for obvious reasons), the limited daylight is beginning to wreak havoc with my circadian rhythms. I lever myself out of bed at late hours only to collapse despondently on the couch, and start to grow weary at around 7 o’clock at night, despite my limited movement and/or productivity during the days. 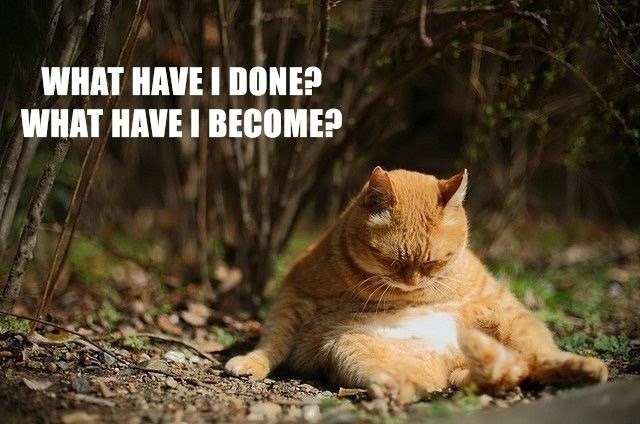 Because early December marks the crunch period for most academics I know, with an endless succession of grading, exams, paper writing and quals, I have no doubt a lot of you are in the same boat. One of the best ways I know of to deal with mid-winter blues is to stress-bake, an endeavour that occurs when you channel all of your anxiety about deadlines and overfull inboxes into kitchen productivity. However, I recognize that some people don’t find culinary pursuits quite so relaxing, but are still fans of awesome food. Keeping all of this, and the osteology theme of the blog, in mind I’m sharing my collection of osteology-themed cakes below. I feel like we’ve hit the point in the season where everyone needs some frivolous outlets for decompression.

May your weekend be filled with sugar and daylight.

This is a stout beer and chocolate cake with coffee frosting (and dark chocolate malt balls) that I made for my graduate colleague Zachary Cofran – his dissertation was on mandibular growth and development in the robust australopithecines. Hence the jaw. As an osteologist, I am duly apalled by the relative proportions of the condylar and coronoid processes. I hang my head in shame. At least the cake was delicious.

This was a pumpkin brown butter concoction with cinnamon buttercream. I made this for a slew of reasons – John Hawks (of eponymous weblog fame) was visiting the lab, we’d just gotten some new fossil casts, and I’d purchased an icing pen that I was dying to use. Bonus points if you can identify the fossil depicted!

I have forgotten what kind of cake this was – possibly chocolate and peanut butter, judging by the hue of the frosting. I do remember that I baked it, and it was decorated by the lovely and talented Dana Begun – sadly I cannot take responsibility for the genius idea to have a gibbon brachiating from a condylar process. Biological anthropology for the win. 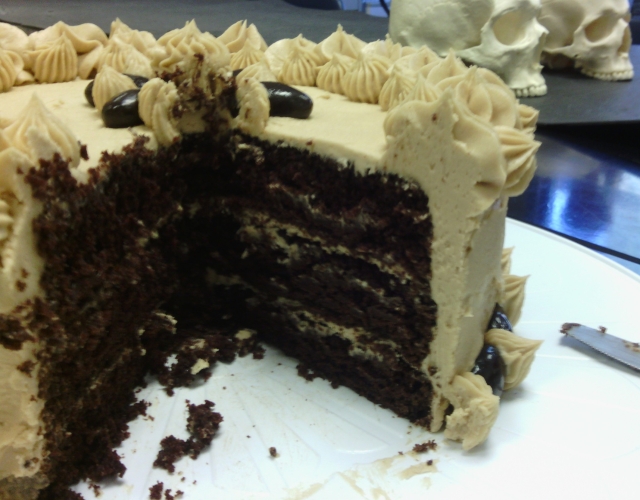 This offering didn’t have anything osteological decorating it, per se, but I find it extremely amusing that I inadvertently included some crania in my attempt to photographically document the stratigraphy of the three-layer monstrosity.

This most recent submission is a repeat of the Guinness and coffee cake from the first photograph. Trying to bake an American-style cake in Kazakhstan (where powdered sugar is typically sold in 30gram packets, all cake pans are designed with imprinted flower motifs, and many apartments are equipped with large toaster ovens rather than actual ovens), is something of an uphill battle. I did what I could with sugar-coated peanuts and tenacity. I think it has kind of a ‘sugar skull designed by a grade school child’ effect, that I hope comes off as charming rather than ill-conceived. We’ll call it ‘whimsical’ and leave it at that.

Image Credits: “What Have I Become?” cat was originally found here.