I’ve spent the past week visiting Madison, Wisconsin, eating vast amounts of cheese curds, quaffing pints of New Glarus and Capital beer, and generally having a pretty outstanding time. However, despite the fact that I’ve been treating this trip as a vacation, osteology has still managed to creep into my travels on a daily basis. In typical osteo-nerd fashion, I’ve not been able to get away from bones, particularly skulls, over the course of my time here.

I saw this sculpture right as I got off the bus, which turned out to be a good omen for the entire visit. It’s a sculpture by artist Jim Dine titled Ancient Fishing, and it’s located in front of the Chazen Museum of Art, right on campus.

Spoiler: I bought one of these shirts. How could I not? It combines both puns AND osteology – two of my favorite things besides cheese curds.

I couldn’t even avoid osteology when out on the town sampling beer: one of my drinking buddies ordered a Left Hand Nitro Milk stout, which was served in this fanciful glass (admittedly, this skull is actually a cranium, and also looks like it may have been subject to a bit of artificial cranial deformation):

The next day I found a display of animal skulls in the herpetarium at the Henry Vilas Zoo, which included a human skull for comparative purposes. I was pretty pumped. 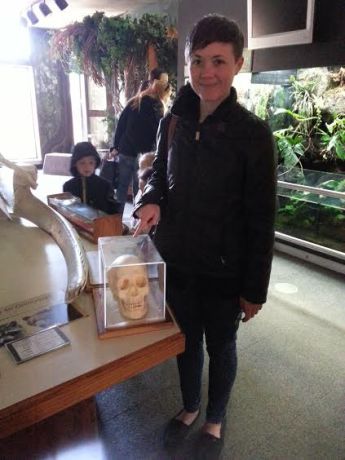 Finally, during my visit I was also able to head to Spring Green to visit the House on The Rock, a bizarre, capacious mansion that houses a massive variety of inexplicable collections of curiosities. If you’ve ever read Neil Gaiman’s American Gods, you’ll recognize it as the home of the giant carousel menagerie that acts as the backdrop for one of the book’s pivotal scenes. Gaiman’s description of the place references some of the morbid, coin-operated 19th century dioramas; however, he neglected to mention that these incorporate some pretty cute skeletons. For example, check out this happy cadaver peeking out from behind the bed: 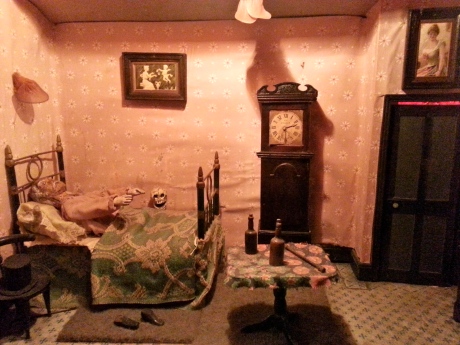 And this little buddy inside of the clock! These were both from a diorama titled The Death of the Drunkard.

Later on I stumbled upon another diorama, called Graveyard Scene, which was installed in a British R.R. Station during the 1800s, featuring a (presumably female) skeleton, complete with long, flowing locks, that popped up out of her grave when you inserted a token.

Finally, towards the end of the self-guided tour, we came upon this winged monstrosity, complete with skeletal horse:

All in all this has been a phenomenal trip, filled with osteology, beer, and cheese. I’m hoping to have just as much fun next week, when I head to the AAPA meetings in St. Louis to present a poster. I’ll put a post about that up in the next few days!

Image Credits: Photos 3-6 appear courtsey of Zachary Cofran. Incidentally, today is his birthday, so if you’re an avid reader of Lawnchair Anthropology you should head over to his blog and wish him happy birthday!