SAA 2015: The Bioarchaeology of Looting

I’m typing this from the lobby of a hotel in downtown San Francisco, which has been one of the most unique cities I’ve ever visited – cars parallel parked sideways on the insanely steep streets, thick blankets of fog rolling down from the hills to envelop the city, and a jostling juxtaposition of immense wealth and entrenched poverty. However, I’ve been here for the past few days not to sight-see, but to present at the 80th annual Society for American Archaeology meetings. I both gave a talk and was co-author on a poster, so recounting my conference trajectory is going to be a two-part post. 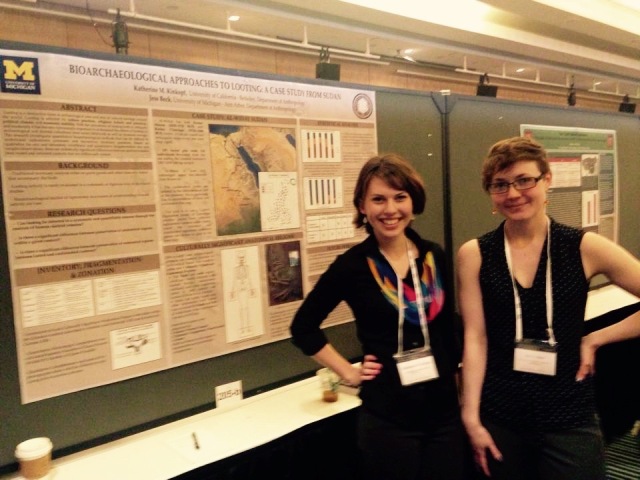 First, on Friday moring, Katie Kinkopf and I presented our poster titled “Bioarchaeological Approaches to Looting: A Case Study from the Sudan.” Katie is currently in her first year of the Berkeley PhD program, but received her undergraduate degree from the University of Michigan. I was her graduate mentor for her undergraduate honours thesis, and we’ve since been collaborating on analyzing the results. This research focuses on determining whether looted burials demonstrate patterns of anatomical preservation that are distinct from those of undisturbed burials.

We’ve uncovered some statistically significant differences in skeletal preservation between looted and undisturbed samples, focusing on the parts of the body (skull, cervical vertebrae, hands, and feet), that looters would most likely have disturbed when removing grave goods from an interment. Our results are particularly relevant given how many archaeological sites are looted, and we’re currently working on getting this work published. We had a lot of enthusiastic archaeologists visit the poster, and we’re eager for even more feedback, so if you’re interested in either bioarchaeology or strategies for detecting looting, take a look! The poster is below, and a link to a pdf is also included at the bottom of the post. In the next few days I’ll also be uploading a video of my talk – unfortunately this will just be my voice recorded over slides, so you miss out on all of the wild, theatrical gesturing that typically occurs whenever I describe something that I’m excited about.

Photo Credits: Photo of Katie and I standing in front of our poster is courtesty of Elizabeth Nelson – thanks Betsy!

This entry was posted in Bioarchaeology, Conferences and tagged anthropology, Berkeley, bioarchaeology, looting, Nubia, University of Michigan. Bookmark the permalink.

2 Responses to SAA 2015: The Bioarchaeology of Looting