One of the things that I miss most about my time at the University of Michigan is the sheer number of talks that I was able to attend, from Department of Anthropology colloquia, to archaeology brown bags, to the Evolution and Human Adaptation lecture series (the year that Maureen Devlin ran it was particularly stellar), to four field grad talks, as well as a bevy of events in other departments.

Imagine my delight to find upon my arrival at Cambridge that there are EVEN. MORE. TALKS. here than there were at Michigan! It has been, frankly, difficult to limit my attendance to two to three lectures per week.

Since arriving I’ve been to presentations on climate change in the Indus Valley (Cameron Petrie), big data approaches to risk and resilience in the archaeological record (Erik Gjesfjeld), and today I even gave one myself, a public talk on how and why archaeologists collect data from human skeletal remains as part of the Cambridge Festival of Ideas – more on that later.

One series that I’ve found particularly intriguing is run by the Human Evolutionary Studies Group Discussion Group (who have shortened their title to “HESDG,” an acronym I’m still not sure how to pronounce). HESDG is currently exploring “Concepts in Human Evolutionary Studies: a Room 101 Approach,” a reference to the novel 1984, where Room 101 is the torture chamber where people are confronted with their worst nightmares (it’s also apparently the name of a British tv series). Each speaker who presents is tasked with specifying one concept in anthropology that they wish to put INTO Room 101, and one concept that they would like to take OUT of Room 101 and intellectually resuscitate.

Rob Foley kicked things off on October 17 with a discussion of “symbolic thought” (-) and “finite space models” (+). This past week they invited Mark Thomas (UCL), a provocateur who instigated a particularly spirited discussion the intellectual constraints inherent in our reliance on species concepts (sample quote: “I think Linneaus stopped biology from being a science. Until Darwin came along, it was just description and bean counting”). From an archaeological perspective, however, it was his selection of a concept to pull out of Room 101 that was the most interesting component of the seminar, because he picked migration.

Much of the resulting debate involved push-back from the archaeologists in the room concerning the cultural-historical baggage associated with the terms “migration” and “diffusion.” I found the discussion particularly ironic given that less than a week before, the biological anthropology department had invited Susanne Hakenback to discuss her research on Hunnic incursions along the Roman frontier, exemplifying just the sort of intensive archaeological interest in migration that Thomas seemed to find lacking. To his credit, archaeologists now term this research on “mobility,” rather than “migration,” so his exasperation may have been rooted in the vagaries of shifting terminology more than anything else.

Hakenbeck opened her talk by emphasizing the abundance of textual narratives that decry the “well-attested violence” of the Hunnic incursions into Europe.

However, she underscored that archaeologists have not found the kind of material evidence of a sweeping and violent migration that you would anticipate, with the exception of a smattering of “Hunnic” material culture and some artificial cranial deformation that has at best amorphous links to the Huns. Accordingly, Hakenbeck and her collaborators decided to examine subsistence practices in order to elucidate the relationships between nomadic-pastoralists (Huns) and sedentary agriculturalists (Romans) along the frontier.

To examine these relationships, they conducted isotopic analysis of diet (δ13C, δ15N) and mobility (87Sr/86Sr, δ18O), taking samples of teeth and bone collagen from five sites in the frontier region of Hungary,. They compared individuals from these Hungarian sites to a sample of roughly contemporaneous settlements from central Germany (full-blown agriculturalists) and central Asia (dyed-in-the-wool pastoralists). The figures below are taken from their 2017 paper in PLoS ONE, and show the central German sample in red, the central Asian sample in blue, and the Hungarian sample in green. 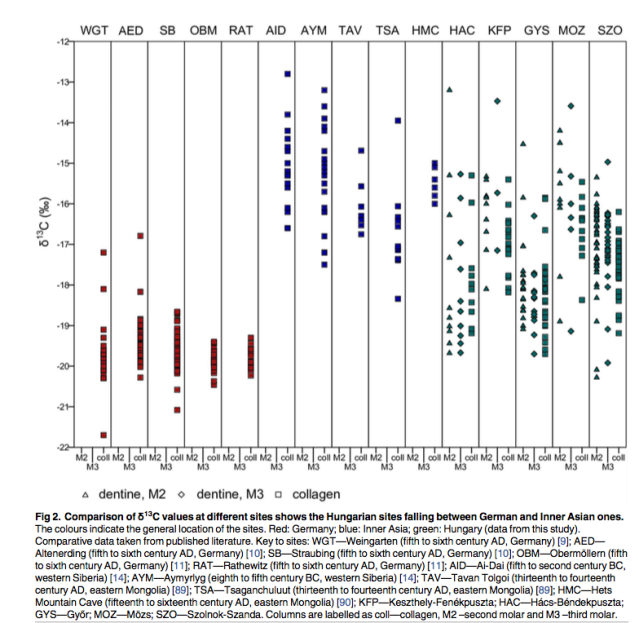 What Hakenbeck et al. found in the δ13C comparison (Fig. 2)  was that the Hungarian sites fell in between the two end-points of agriculture and pastoralism, showing more dietary variability than evidenced in the agricultural population. A similar pattern  occurs for the δ15N values, where none of the Hungarian sites have values in the upper ranges that you see for central Asia (Hakenbeck et al. 2017, Fig. 3). 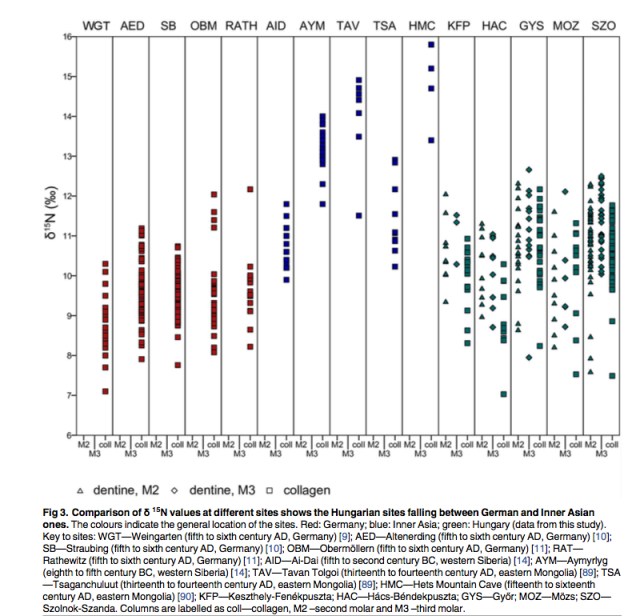 In regards to mobility, Hakenbeck found that about 1/3 of the individuals from the Hungarian sample fell outside of the local range (Hakenbeck et al. 2017, Fig.6)m and emphasized that this is a very large range of variation in comparison to other published material. 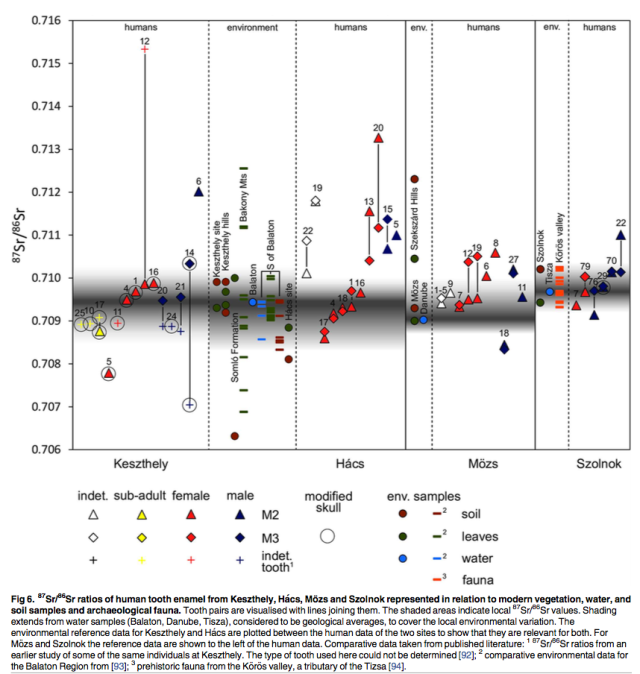 Combining the results of the analyses of diet and mobility shows carbon and nitrogen evidence for mixing of pastoral and agricultural diets, and the strontium isotope ratios suggest quite high levels of mobility for individuals living along the Roman frontier.

Accordingly, despite historical depictions of sweeping waves of violent incursions, the archaeological evidence paints a different picture, in which geographically intermediate communities began experimenting with new, more flexible subsistence strategies that incorporated both agriculture and animal herding. As the authors conclude, “The influx of nomadic populations into east-central Europe in the fifth century AD may have caused enormous political upheaval and documented episodes of violence, but isotopic evidence shows people finding strategies to mitigate and perhaps even to benefit from these changes by modifying their subsistence economies” (Hakenbeck et al. 2017: 19).

The talk provided a great demonstration of how archaeologists use material evidence and isotopic methods to address migration in the ancient past. It also underscored that even though we have replaced the term “migration” with a new emphasis on mobility, as a discipline we are still very much concerned with how and why people and ideas move from place to place.

1 Response to Huns, Romans, and lecture series at Cambridge