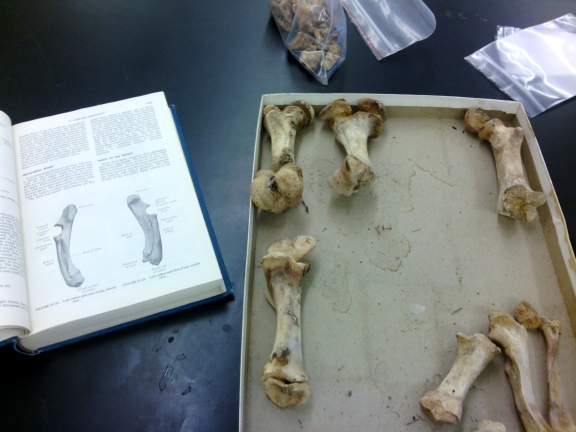 Bonus points if you can spot the pun in the title of this post.

Last year I got wind of an exciting project that was being undertaken at the University of Michigan. Jason De León, an anthropologist and professor in my department, was looking for a faunal analyst to examine some bones for him. This project had everything. Taphonomy. Bones. Applied Anthropology. Social Inequality. Borders. Faunal Prep. Osteological Analysis.  Animal Behavior. In short, all it was lacking to entice a bioarchaeology graduate student was Poptarts and an unending supply of black coffee. 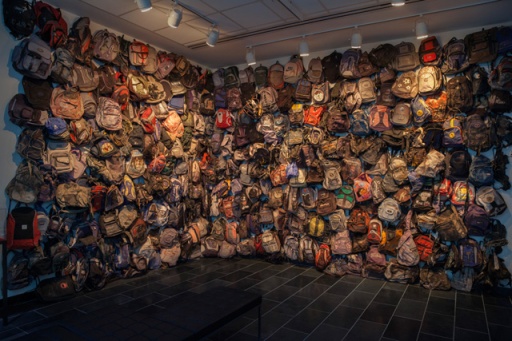 Art installation that is part of “State of Exception”, an exhibit in which objects and photographs from the Undocumented Migration Project are displayed and discussed

After eagerly (and perhaps somewhat aggressively) offering up my services, I learned a little bit more about what the project entailed. De León was looking for someone who could identify disarticulated pig bones from  a forensic taphonomy experiment that was being conducted as part of the Undocumented Migration Project (UMP). The aim of the study was fairly straightforward – understanding what happens to human bodies that are left in the harsh environment of the Sonoran desert. In order to unpack why an anthropologist is interested in something as arcane as decomposition, you need a little bit of background on the discipline of taphonomy, the study of how organisms decay over time. 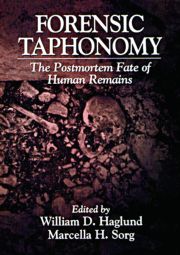 This book is boss. Would that I lived in a world where this were an acceptable coffee table volume.

Forensic taphonomy is an area of study that specializes in understanding how natural processes affect the decomposition and recovery of human remains. However, the kinds of factors that affect human bodies post-mortem are heavily dependent on aspects of local ecology. For example, you  wouldn’t have to worry about vultures acting as scavenging agents in the high Arctic, or alligators disarticulating carcasses in the Rockies. That means that understanding the precise nature of what is likely to affect a body after death requires knowing exactly how the process of decomposition unfolds in a given environment.

However, the UMP wasn’t interested in forensic taphonomy out of simple scientific curiosity. Developing an understanding of regionally specific forensic taphonomy is particularly important for the Sonoran Desert region of the southwestern US border. This arid expanse of land stretches from northern Mexico into southern Arizona and California, and its location makes it a key territory for illegal border crossing. Because of the harshness of the terrain and the difficulties involved in avoiding border control, some 5,500 people have died since 1998 while trying to cross into the United States. Strikingly, humanitarian groups have estimated that over 2500 people have died in the Sonoran Desert since 2000. (Anderson 2013; Derechos Humanos). 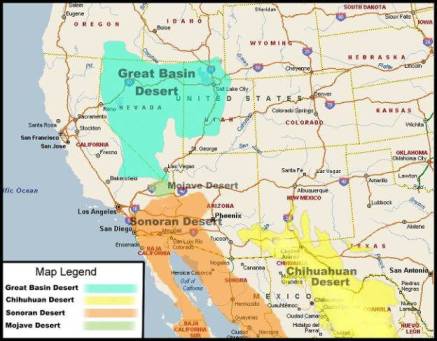 Five years of work on the Undocumented Migration Project have illuminated the multiple unanticipated consequences of the U.S government’s Prevention through Deterrence strategy. PTD deploys a range of security measures, including high fencing, field agents, and border patrols, that are meant to prevent illegal immigrants from crossing the border near urban areas. Instead, PTD tactics force migrants to cross dangerous swathes of inhospitable desert in order to reach their goal. While the Prevention through Deterrence initiative has failed to deter border crossers, it has made the journey vastly more dangerous for would-be immigrants (De León 2012).

Border crossers represent a marginalized social group that has been subjected to extreme environmental stress and high levels of mortality as the result of current immigration policies. What makes the situation even more troubling is that because of the legal status of border crossers, fatalities are rarely directly reported in a timely fashion. Instead, law enforcement agencies are tipped off by migrants, researchers or pedestrians, often a signifiant amount of time post-mortem. As a result, recovered remains are highly fragmented, disarticulated and dispersed. The process of identification is further exacerbated by the dearth of experimental research on Sonoran Desert taphonomy. That’s where this UMP side project comes in. 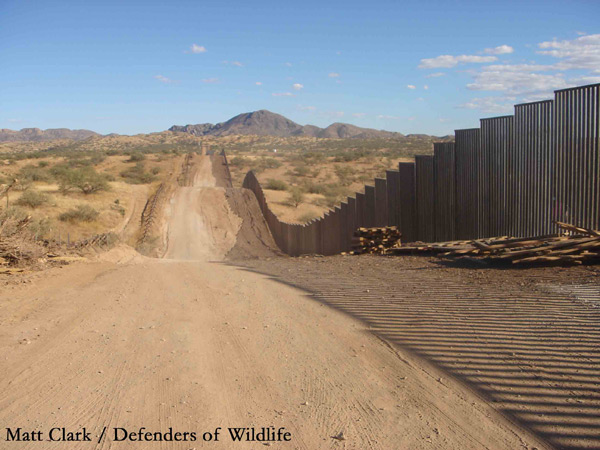 In order to understand exactly what happens when someone dies in the desert, UMP researchers used pigs as proxies for human bodies, to examine the many factors involved in the process of decomposition, animal scavenging and disarticulation. This wasn’t simply a random selection of available livestock.  In fact, pigs are used by multiple disciplines as stand-ins for human bodies. As Mary Roach notes in Stiff “Pigs were popular subjects [in automative impact testing] because of their similarities to humans “in terms of their organ setup,” as one industry inside put it, and because they can be coaxed into a useful approximation of a human sitting in a car” (2004: 94). The similarities between pigs and humans aren’t only internal – pigs approximate human body mass, and the unique nature of their hide has led these animals to be used in a variety of forensic anthropology experiments (e.g. Morton and Lord 2006). Lacking the thick fur coat possessed by most other domesticated mammals, the thinner skin of subadults pigs provides a good proxy for fragile human skin. While many forensic taphonomy studies use actual human remains, these studies must take place on body farms –  circumscribed areas that are usually surrounded by fences and other obstacles which act as an impediment to terrestrial wildlife. To get a solid understanding of how the process of decomposition unfolds in the Sonoran Desert proper, with no boundaries to keep wildlife at bay, pigs were the best possible option. 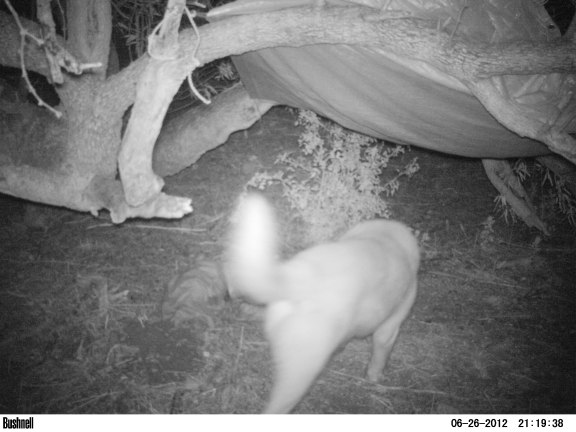 One of the key goals of the UMP taphonomic study was to explore the effects of local microenvironmental variation on the process of decomposition. Parties crossing the border need to travel fast – they operate in a harsh and unfriendly arid environment, and are burdened with the constant threat of discovery. Because of the pace and danger the journey entails, it is rare that individuals who die when crossing the border can be buried. Interviews with former migrants suggest that deceased individuals can be placed in a variety of environments, from underneath trees to within makeshift cairns.  To replicate these sorts of conditions, in the summer of 2012, the bodies of three pigs were placed in three different taphonomic environments: one under a tarp that provided shade, one under direct sunlight, and one in a cage that acted as a “control” pig. Material possessions and clothing were also associated with each pig. These types of artifacts have the potential to aid in the identification of individuals, so it was important to document how they were dispersed during the process of decomposition. The sun, shade and control locations were outfitted with stop-motion cameras (the same type of equipment responsible for the most spectacular National Geographic photos), so that scavenging activity around the pigs could be documented at all times. After skeletonization, UMP students and researchers mapped the spatial dispersal of remains using a total station, to establish how far individual skeletal elements travelled, and to understand what parts of the body were most likely to be recovered. 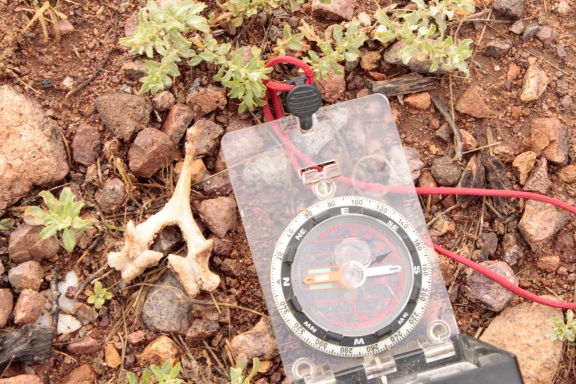 Our results for the first year’s study suggest that while there are minor variations attributable to differences in microenvironment, there is still a broad anatomical patterning to recoverable remains. Faunal analysis of the preserved elements indicated which elements would most likely be recovered by searchers or law enforcement agencies. Spatial analysis enabled us to make predictions about how far individual elements and material possessions were likely to travel during the process of decomposition and scavenging. Finally, the first year’s work identified some hitherto underrepresented members of the faunal scavenging guild.

While this work at first seems morbid and esoteric, this is one of the few times that I’ve been in academia that a study produced  results that can be immediately applied to contemporary, real-world contexts. The UMP taphonomic study provided tangible guidelines that can be used in the search for identifiable remains in the Sonoran Desert – recommendations like how far to extend a search radius, what elements will likely be recovered, and how local animal activity will have affected skeletonization and estimates of time since death. Unfortunately, given the current climate along the southwestern US border, fatalities will likely continue to accumulate in the years to come. By refining our understanding of Sonoran Desert taphonomy, we can at least ensure that those who died trying to cross the border will eventually make it home.

Note: Last summer, two more pigs were placed in novel taphonomic environments, in order to continue the investigation of the taphonomy of desert decomposition.  The work from the first season is due to be published in the Journal of Forensic Science in 2015 (Beck et al., in press), and I’m currently working on analyzing the faunal materials from summer 2013. Expect a few more posts down the road that focus on prepping reference skeletons and conducting the faunal analysis….

Anderson S. 2013. How Many More Deaths? The Moral Case for a Temporary Worker Program. National Foundation for American Policy Brief.

Beck, J., Ostericher, I., Sollish, G and J. De León. [In Press] Animal Scavenging and Scattering and the Implications for Documenting the Deaths of Undocumented Border Crossers in the Sonoran Desert. Journal of Forensic Science.

Image Credits: State of Exception photo from UMP website. Forensic Taphonomy cover found here. Map of the Sonoran Desert from in-the-desert.com. Map of migrant deaths from an article in the Guardian, based on research conducted by Humane Borders. Photo of the border wall taken by Matt Clark for Defenders of Wildlife, found online at no-border-wall.com.

2 Responses to Sussing out site taphonomy: Understanding formation processes in the Sonoran Desert