Can you teach a wolf brain new tricks? Some thoughts on artificial selection and brain evolution in canids 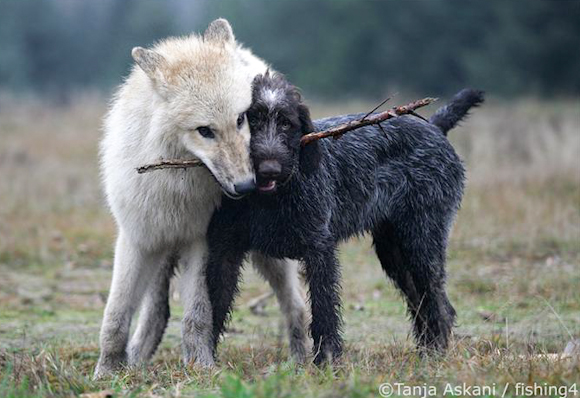 A few weeks ago, I attended another Evolution and Human Adaptation lecture. The ultimate reason I went to another talk was  to expand my mind and learn about the evolution of the human brain, though as always the proximate reason I attended the talk was to avoid working on my NSF draft. This week’s topic was “Brain Evolution and Human Uniqueness”.  Tom Schoenmann, a professor at Indiana University, discussed the strategies that biological anthropologists use to unpack the evolution of human encephalization, or our increase in brain size over and above what you’d expect based on our body size. His research incorporates all sorts of exciting new techniques. Watching him talk about mapping quantitative and qualitative differences between chimp and human brains, I felt like Alan Grant sitting in on Hammond’s infamous “Dino DNA” presentation. I didn’t even know  we could do that! (The relevant paper, clearly aimed at the general public, is titled “Langrangian frame diffeomorphic image registration: Morphometric comparison of human and chimpanzee cortex”and  is available on Schoenmann’s website. Don’t worry. I don’t know most what most of those words mean either). The gist of the technique as I understand it is that it’s a way to virtually expand a chimpanzee brain so it “fills” a human brain, allowing you to map differences in the size and shape of different areas of the expanded chimp brain while doing so. Neat stuff.

Where is the “waking you up by sneezing on you” lobe?

Studies of this nature have demonstrated that two of the key areas that differ between chimps and humans are the prefrontal cortex and the temporal lobe. As Schoenmann explained it, the prefrontal cortex mediates behaviors like future planning, maintaining goals, memory for sequential order and social information processing, while the temporal lobe mediates things like auditory processing, facial recognition, and aspects of language, particularly connecting concepts to words. However, as soon as Schoenmann started talking about these suites of behaviors, my mind began to wander. Specifically, I began to think about dogs. Some of those same behaviors that characterize human sociality could also be argued to characterize our canine companions. In fact, the emerging consensus in a number of animal behavior studies is that dogs are peculiarly and particularly attuned to their human compatriots.

What ELSE would you call this besides “future planning” and “maintaining goals”?

One example of dogs participating in a typical human behavior can be found in”left gaze bias”. When people look at other individuals, they normally examine the right side of the other person’s face. This is because the right side of the opposing face expresses emotions more accurately, and so humans demonstrate a gaze bias: they look to the left first, and more frequently, but only when examining faces. Strikingly, Guo et al., (2009) have demonstrated that domestic dogs also demonstrate a left-gaze bias, but only when presented with images of human faces. When presented with images of monkey faces, dog faces, or inanimate objects, dogs don’t demonstrate the bias, which suggests the degree to which they have been selected to process human emotional cues. As Guo et al., emphasize “The ability to extract information from human faces and respond appropriately could have had a selective advantages during the process of domestication, especially as the emotional content of these faces may be of immediate adaptive behavioural significance”(2009:415).

And dogs aren’t just good at reading our emotions – they’re also attuned to our behavior. Studies have shown that dogs are able to use human social cues – like pointing, tapping, or, staring – to identify locations where food is hidden in laboratory settings. What makes this impressive is the rapidity and flexibility dogs demonstrate when it comes to learning these gestures. While it takes primates in similar laboratory settings numerous attempts to learn a single specific cue, dogs are able to rapidly master a number of different directives quickly, suggesting that “…dogs have unusual abilities for comprehending communicative gestures and signals provided by humans”(Hare 2004:280).

It’s all about the left-side gaze…

This ability isn’t a typical canid trait. Hungarian research using a sample of dogs and habituated wolves has produced some fascinating results which point to the unique ability of dogs to focus on humans, and even occasionally use them as tools:

“[One study] tested how often dogs and wolves would request help from humans in solving a problem they themselves were unable to solve. First, the wolves and dogs were shown that they could easily access a bowl of highly desirable food if they simple removed an obstacle between themselves and the food. Both the wolves and dogs easily solved such a problem. However, the trick was that after the subjects had learned how to obtain the food reliably, the problem was altered so that it was impossible to remove the obstacle. While the wolves worked tirelessly to access the food, continually trying new strategies for the duration of the test, the dogs instead almost immediately gave up and either approached, barked at, or stared at the experimenter–as if requesting help. This finding corroborates previous research showing that dogs will direct humans to hidden objects that they wish to obtain, such as toys or food, while showing that this ability is also not inherited from wolves” (Hare 2009: 282 – emphasis mine).

There are also some interesting hormonal studies that demonstrate that both humans and dogs benefit physiologically from spending time together. In humans, oxytocin is associated with promoting intense or intimate social bonding, while dopamine is associated with general pleasurable sensations. In a study that had humans sit down and interact positively with dogs  (e.g. talking, petting, low-key playing) oxytocin  levels nearly doubled , and dopamine levels increased, for both species after less than 30 minutes of such interaction (Odendaal and Meintjes 2003). These researchers underscored that the ‘socially symbiotic’ relationships between humans and dogs was likely rooted in the fact that both species needed “attention on a normal, basic emotional level as a prerequisite social interaction” (300).

Finally, there’s the case of Chaser (see clip above), the border collie who knows over 1,000 words, and can learn new ones by inference. If those sorts of abilities wouldn’t have an impact on the structure and size of the parts of the brain that mediates language acquisition, I don’t know what would.

Since dogs are imbued with so many human characteristics, I wondered, isn’t it likely that their brains differ structurally from wolves in the same way that ours do from chimpanzees? Now, let me underscore right off the bat that there’s a significant problem built into this analogy: wolves are ancestral to dogs, but chimpanzees are not ancestral to us. Instead, chimpanzees and humans share a last common ancestor, some 4-8 million years before present. However, because we don’t know exactly what that last common ancestor looked like, but all the hominin fossils from that time frame are relatively chimp-like, contemporary chimpanzees are often treated as a stand in for the LCA.

Either way, some of the artificial selective pressures that we have used to breed dogs in the last 10-20,000 years have produced a kind of social cognition that is often remarkably similar to our own, particularly in terms of reading human emotions and responding to human social cues. Right now, this is all idle speculation, but I think that it would be worthwhile to investigate the degree to which dog brains have structurally diverged from wolf brains, because I’m willing to bet the prefrontal cortex and the temporal lobe are both involved.

Now somebody else please go write a dissertation about this. I can’t, because if I tried, my committee might finally disown me.

Note: Much of my knowledge of canid sociality comes from a fantastic animal behavior seminar I took in psych a few years ago – Social Behavior of Wolves and Dogs. Unfortunately Barb Smuts, the professor who taught it for several years, is currently emeritus, so the course is no longer offered, but reading any of her fascinating studies of animal behavior is definitely a worthwhile pastime.

Image Credits: Photo of wolf and dog playing is from Tanja Askani, via Taildom. Image of dog’s brain is from www.canineambitions.com. Scout balancing things on his head is taken from foodrepublic.com. Photo of dog getting treat is from SheKnows.com. Wolf pawing at container is from the Family Dog Project website of the Eötvös Loránd University.

This entry was posted in Evolution and tagged brain size, dogs, evolution, wolves. Bookmark the permalink.

4 Responses to Can you teach a wolf brain new tricks? Some thoughts on artificial selection and brain evolution in canids