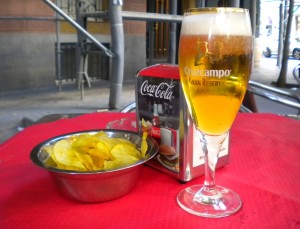 On Friday night I took a much needed break from dissertation work. Instead of staring at my Excel spreadsheets with a furrowed brow, I went out for beer and tapas to celebrate my roommate finishing the two-day long ordeal that is the Cambridge B1 English exam. In the province of Jaén, tapas consist of little dishes that arrive at the table with any beverage you order. You pay for the drink – whether it’s beer, wine, or just soda – but not for the food that accompanies it.


In other parts of Spain you’ll sometimes receive lesser snacks that are also called tapas – things like peanuts, chips, or small plates of olives. However, in Jaén they really do it up right. 2€ will get you not only a beer, but also such delicacies as a plato alpujarreño (chorizo, blood sausage, fried egg and potatoes), patatas a lo pobre (potatoes cooked in butter with onions, peppers, meat and rustic bread) or boquerones (tiny fish that are either fried or served in vinegar). 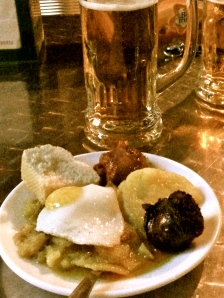 Occasionally, bars will let you “eliges tu tapas“, or select your own tapas from a list of between 10 to 30 available dishes. These establishments generally provide more fast-food style options such as bombas (a large ball of meat and cheese that is breaded, deep-fried and served with a spicy red sauce), patatas con alioli (boiled potatoes garnished with a garlic mayonnaise sauce), and perritos (you guessed it, little hot dogs) . Higher-end restaurants tend towards more traditional dishes, like cazón en adobo (dogfish that is marinated before being fried in nuggets), berenjenas fritas con miel de caña (fried slices of eggplant with sugarcane honey), or salmorejo (a cold tomato-garlic soup, thickened with bread, that is a Cordóban specialty). And, of course, tapas would not be tapas without the old, delicious Spanish standbys, jamón Iberico and queso curado.

However, while preparing to launch into a focused consumption of my patatas a lo pobre, one of my drinking companions (the astute Zachary from Lawnchair Anthropology), mentioned that my beer appeared to be having some issues. Specifically, he underscored how much the rings of foam around the glass resembled linear enamel hypoplasias, the lines of growth interruption that usually result from nutritional deficiencies during childhood.

I saw it as soon as he pointed it out. Amusingly, this strange phenomenon only affected my beer – everyone else’s beverages acted normally. It seems that osteology really is everywhere, but it’s especially ubiquitous if you’re collecting your dissertation data.

Image Credits: The photo of LEH on the maxillary permanent dentition was taken from Past Horizons, here. The second and third tapas photos appear courtesy of Zachary Cofran.