[Explanatory Note: I’m going to be doing a lot of travelling in the next six months, and  I’ll occasionally post a travel essay that has nothing to do with osteology or bioarchaeology. These will be tagged under a new “Travel Essay” category, so they’ll be easy to bypass if you’re only looking for strategies for siding the calcaneus or palpating the anatomical snuffbox.]

I’m on a train that’s barreling south through the sun-drenched plains of Castilla La Mancha. I’ve been up since three in the morning and a persistent, exhaustion-fueled hunger is starting to kick in; it feels like a widening hole is slowly gnawing into the soft tissue between my stomach and my spleen. As is typical of this summer, I’ve spent much of the past week travelling: on trains, cars, taxis, buses and airplanes, to get from the somnolescent, sun-drenched Andalucían city I currently call home to the mountain-ringed Macedonian capitol of Skopje. This trip marked my second visit to the region, and as my flight from Rome began its descent I realized that I had forgotten how rugged and stereotypically Balkan the surrounding terrain actually is. I mentioned to one of my friends that I don’t think of a place as a real city unless it has a neighboring mountain topped by either a castle or a cross. Skopje meets my criteria, with the looming, cross-brandishing Vodno a constant back-drop to the hum of Eastern European urban bustle. Many of the tiny flourishes of post-Soviet life reminded me persistently of my childhood in the Balkans, from the angular spool-shaped cement blocks unevenly arranged into sidewalks, to the tiny, anachronistic Trabants and Škodas zooming through the streets, and the abashed, amused pleasure the local populace seems to feel at foreigners mangling their language – whenever I attempted even the briefest  “fala” or “smetka” after speaking English, shop keepers giggled and bartenders bit back their smiles. 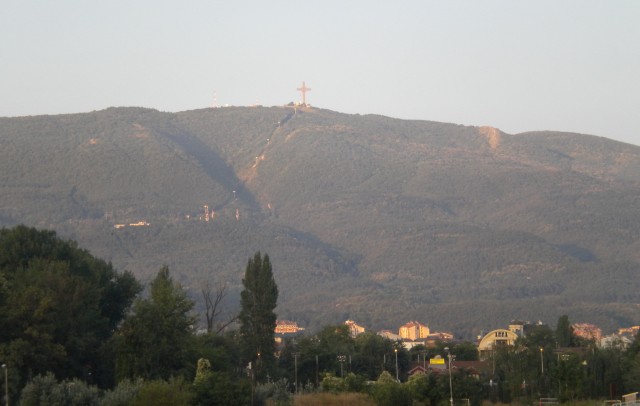 The food, however, is what always does it for me. Simple Shopska salads of roughly chopped tomatoes and cucumbers topped by mountains of a shredded sharp cheese called cyrene, the ubiquitous half-bitter, half-sweet roasted peppers that appear in everything, and, of course, the yogurt. Macedonian yogurt is plain, sour, and so fluid that everyone drinks it rather than eating it with a spoon, whether it comes in a bottle or the smaller, pull-top containers we are more familiar with in the West. While your first sip is bracingly cold and sour, the flavor and texture quickly become addictive in the unrelenting heat of Macedonian July, especially when drunk as an accompaniment to the products of Macedonian bakeries. Burek and banichka, differently shaped variants on a cheese pastry theme, are my favorite foods to eat in this part of the world. Greasy, buttery layers of filo dough are layered on top of each other, rolled around chunks of crumbly goat or sheep’s cheese and then shaped into concentric rings of pastry and baked in a ceramic or metal oven, which is traditionally nestled in a constantly banked mound of coals. Bakeries are found all over the streets, selling both burek and the round circles of sesame-studded bread that I remember vividly as being my favorite mid-day snack in Greece, where it is called koulóuria, the lightly sweetened, chewy bread punctuated with the toasted, nutty flavor and gritty crunch of the sesame seeds. 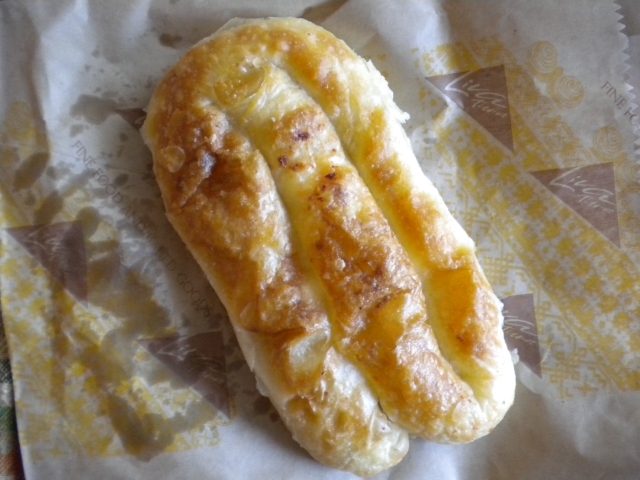 Burek only costs 40 or 50 denar if you buy it at a small local shop, around a dollar for a substantial amount of flaky, achingly greasy bread. It’s handed to you hot from the case, wrapped in plain gray paper that immediately becomes saturated with grease, and slid into a filmy plastic bag along with a narrow rectangular receipt only a little wider than the width of your thumb. Receipts are proffered for even the smallest of purchases, printed out on large hand-calculators that flank the cash register in any respectable establishment. On this trip I was also introduced to kiflochki, long breadsticks that are soft only when eaten fresh out of the oven. They are traditionally made with so much salt that they have to be dipped in yogurt to be palatable. Demolishing a paper-wrapped bouquet of them at six in the morning, purchased fresh from a road-side Albanian bakery, was a gustatory highlight of the trip.

Culturally, one of the things that struck me most about the city was the linguistic versatility of its populace. It seemed like everyone in Skopje, from the cashiers to the cab drivers, spoke English. What’s more, they didn’t appear offended or put out at having to use it. I felt none of the low-grade linguistic hostility I’ve witnessed in other European capitals, where my American-ness seems to be taken as a deliberate and uncouth insult, like belching in public or taking off a reeking pair of shoes on a train. In contrast, the denizens of this Macedonian city seemed gently amused by my blundering foreign presence, treating my missteps with smiles rather than scowls. From the old women who kissed my cheeks and patted my face at the wedding, to fellow guests who taught me how to dance the oro, undeterred by my clumsy steps and sweaty hands, all I felt was overwhelming hospitality.

I must admit, in these sorts of contexts its hard not to feel embarrassed by my monolingual vocabulary. This summer I’ve met Japanese scholars with doctorates from German universities who speak English with unerring, American-accented fluency, and German archaeologists who can convincingly wheedle Spanish hostel concierges into finding an extra room during a the chaos of a flamenco festival (and then turn around and explain how they did it to me in English that is just as capable). The wedding I just attended was a Belgian/French-Canadian/Macedonian extravaganza, where everyone had to speak at least two languages just to handle the quotidian politics of familial communication. Even now, the young painter from Barcelona, sitting across the train table from me, is devouring a George R.R. Martin tome – in English. “Do you understand any of that?” another seatmate asked her in Spanish at the beginning of the journey. “Oh, I get most of it” she answered, “though a few things get lost”.

On that note, it is probably time to burrow back into my Andalucían life, and attempt, once again, to apply myself to the slow, exhaustive process of communication. Or, as I would so eloquently put it in my fluid, graceful Spanish “Estoy ya…no,no, todavía…aprendando la idioma, y por favor ¿puede usted hablar un poco mas despacio? No, no desPAcio. ¿Lentamente? ¿Menos rapido? Lo siento, no es importante, no es importante, no pasa nada, no se preoccupe.”