In mid-October I had one of those hellish trans-Atlantic journeys that are the stuff of nightmares. I left for the Pittsburgh airport at 230 am, flew to Chicago, spent 9 hours in O’Hare, flew to Dublin, booked it through the terminal during my one hour connection, landed in Budapest at 1000 am the next morning, spent 12 hours at an airport hotel, returned to the airport to catch a shuttle bus at 100 am, and arrived at my final destination 9 hours later. By the end of my trip I felt like a human pinball. It didn’t help that over the course of my solo journey I was tasked with the care and keeping of this behemoth instrument:

So why the crazy travel schedule and hefty equipment? Archaeological fieldwork, of course.

Anca and I mapping between Tombs 1 and 2.

I’m embarking on a new project in the Apuseni mountain region of Romania, bringing together bioarchaeological research on unstudied skeletal collections with the excavation of an Early Bronze Age cemetery. The Early Bronze Age in this part of Romania dates to 2700-2000 BC, and so the new project overlaps with my bioarchaeological research in Spain.

The Apuseni mountains are part of the Western Carpathian range. 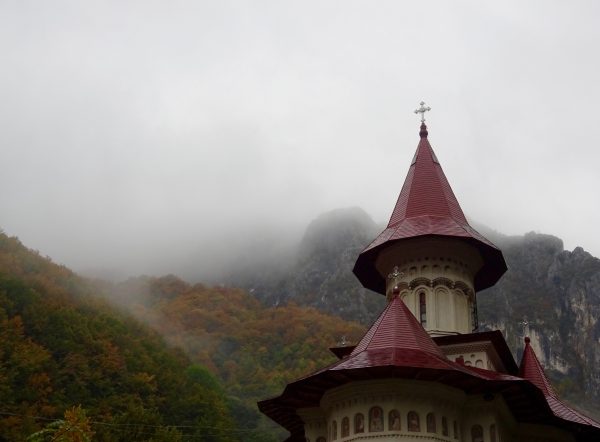 The Ramet Monastery, down in the valley.

Old school barn and haystack down the road from the Ramet Monastery.

The Early Bronze Age cemetery we’re working at is called Râmeț. The site extends along a ridge top just off of the road to the town of Râmeț, identifiable today only as a series of earthen lumps on the surface of the mountain. It has never been excavated before, though portions of some of the tombs have been disturbed as a result of a country trek that also runs along the mountaintop. Because Râmeț is located deep in the mountains, we were only able to head to the field when the weather permitted, and so our hours on site were precious.

On the days when it was sunny, however, the view was absolutely glorious. I spent most of my time looking out over this landscape:

I was on total station duty, which means that I was tasked with setting up and levelling a delicate, expensive piece of machinery which is notorious for not wanting to be levelled.

Once the total station was up and running, I would hunker down behind it like a cold and irate gargoyle, 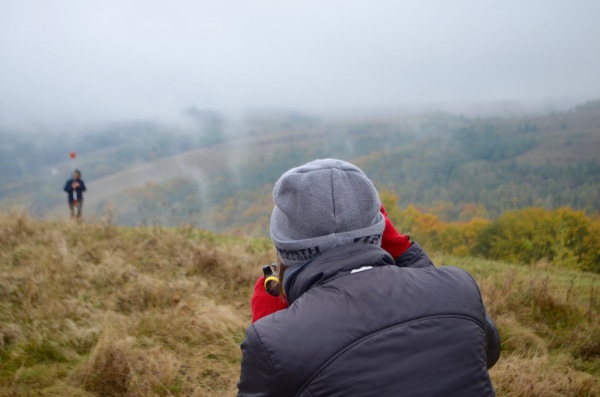 Focusing on the ever patient Anca.

as Colin and Anca would stride majestically across the landscape to take topo points. 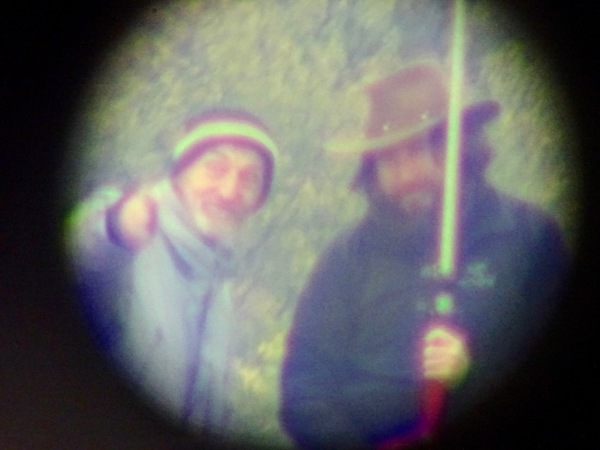 Colin and Horia, as seen through the total station.

The landscape was beautiful but beset by all kinds of hazards, of the bovine, 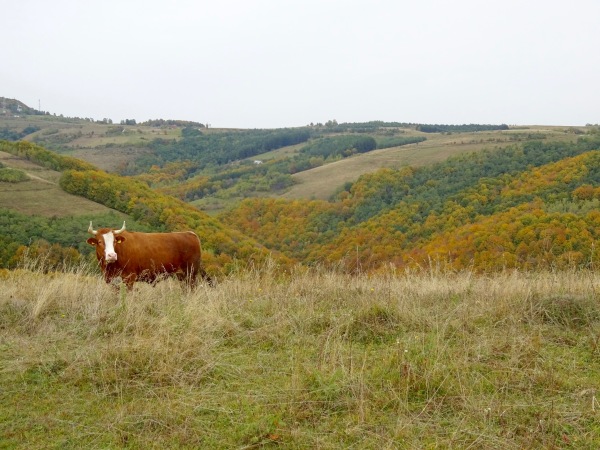 Fortunately this vicious beast did not knock over the total station.

He did, however, cause something of a commotion when we realized he was disturbing the pin flags we used to mark our transects.

Me: “Colin, what’s the hold-up? Why have you stopped?”
Colin: “He’s eating the pin flags!”

In the end we spent about five days in the mountains, and mapped in over 2,000 points.

Colin has now started to put these together into a topo map in ArcGIS, which we will use to apply for an archaeological permit in the early winter.

Although short, I had a great pilot season, and I’m already looking forward to going back to the Apuseni mountains this summer.

Image Credits: Map of Romania found here. Colin Quinn and Anca Dumitru are responsible for at least some of these photos, though I can’t fully remember which ones right now. Thanks are also due to the University of Pittsburgh Center for Comparative Archaeology Research Award for funding my participation in this venture.

5 Responses to Archaeological fieldwork in Romania